To say that that the incident involving Elmira Enforcers owner Robbie Nichols and a Federal Hockey League referee following the first period of Sunday’s game has been nothing short of embarrassing for the Enforcers, Nichols, and the FHL, is probably an understatement.

Well, Tuesday afternoon the Enforcers decided that just having your owner allegedly shove an official and receive a $25,000 fine for it wasn’t enough, and decided they were going to ask their fans to chip in to help pay the fine, creating a Go Fund Me page with the goal of raising the $25,000. 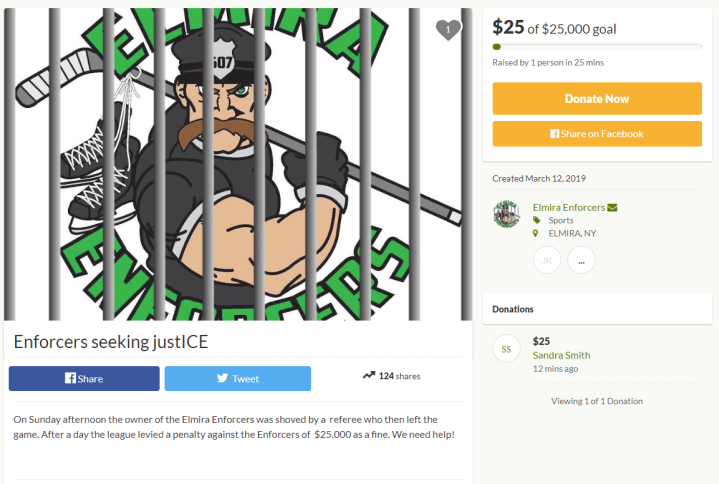 Oh, and as you can see in the screengrab above, the fundraiser decided to use the description area to blame the refs for the incident, this despite video of the incident showing that does not appear to be the case at all.

Needless to say, this did NOT go over well with hockey fans, who roasted the decision to post this campaign, where it was shared on both the Enforcers Facebook and Twitter pages.

Before the Facebook and Twitter posts about the campaign were eventually deleted, the above comments were all deleted from the post, leaving just one comment from a person who donated $25, and said something along the lines of, “Let’s get back to hockey.”

The campaign and social media posts were up for around an hour before they closed, raising a grand total of $45 in that time. Only $24,955 to go!

I’m honestly not even sure where to begin with this one, because a team asking its fans to pay for an owner’s fine is one of the most shameful things I’ve ever heard of, and I guess we should be glad that only $45 was raised before things were thought through and this was all deleted.

Think of it this way: Fans who paid money for tickets and got one period of hockey Sunday, were asked to pay for the fine that resulted from the incident that cancelled the game in the first place. Not a good look.

Just when you think you’ve seen it all in hockey, or even in this story, something even crazier happens.