WINSTON-SALEM, N.C. – When I came to the Twin City this weekend for the Federal Hockey League Commissioner’s Cup Finals, I expected two great teams and rivals to battle in close contests. My expectation was that this, of all times, would not be the time for controversy.

In fact, I’d already began drafting up my article at Joymongers Barrel Hall while waiting to attend Game Two. Writing about how welcoming the Thunderbirds are for media, the environment of The Annex, the politeness of fans I’d seen out and about in Winston-Salem, and what a great-showing this Finals was to be for the league coming out of one of their most successful seasons – ever.

I knew that the night would not feature a repeat of the previous night’s result; a 7-3 whooping from Carolina where they dominated every facet of the game against the Enforcers. My intuition had been proven correct. Elmira came out slow-but-determined, clearly fixing the gaps that had killed them in Game One: time in their defensive zone was down, they were getting more draws near their shooting side, a ton more shots were being blocked, and they made Goaltender of the Year Christian Pavlas more than uncomfortable.

Elmira’s, err… enforcer Brandon Vuic would even open up the scoring with a sneaky shot from the middle of the right circle to give the road team a 1-0 lead after one, despite being out-shot 12-3. Elmira would continue doing the right things in period two, and find another pair of goals from Gavin Yates and Vuic. Suddenly, it was 3-0 Elmira, and it looked like the Enforcers might just absolutely steal a huge road win.

Then, Carolina woke up. Three goals in 1:11 to close out the second period, and suddenly it was a 3-3 game with a momentum shift to the home flock. A quick-moving, scoreless third period would lead into the first overtime game in the Commissioner’s Cup Finals since April 12, 2017 between Danville and Berlin.

An intense overtime period. A masterful performance from Elmira goaltender Troy Passingham – with 73 SAVES. A drive into the offensive zone from the right side for the Thunderbirds that turned into a shot off the right shoulder of Passingham, rolled down behind him, and slid behind the goal crease. No initial signal from the goal judge’s (whom Elmira fans had thought was wearing a Thunderbirds jersey – this figure turned out to be a Thunderbirds salesman) light or official eventually resulted in the call being made, and the Thunderbirds celebrated crazy.

VIDEO: Here was the OT goal in question from tonight's Carolina-Elmira game. Can't see much from this angle, but the ref (in the correct position) points at the same time the goal light goes on, so they clearly saw something the broadcast camera couldn't. pic.twitter.com/9QzHLshzcK

Elmira didn’t see the call this way. Enforcers Captain Ahmed Mahfouz (and soon, the whole team) immediately got into the ear of the official, and started debating the goal. Carolina stayed on the ice, waiting to hear confirmation of what they’d already known: that they were OT winners.

With a raucous crowd, high tensions, and both teams on the ice during the lot of it, it was no surprise that the teams started to get tightly together and exchanging words. This lead to many words being said, and ultimately to a lot to unpack.

Enforcers Coach Brent Clarke had his own bout with the officials, to the point of him shoving a linesman and getting a double-Game Misconduct, one for his push leading to a Physical Assault of an Official misconduct, and a Verbal Abuse of an Official.

While the officials skated away to check with the goal judge and had the goal confirmed, Mahfouz blasted his stick against the glass and was immediately ejected from the game. 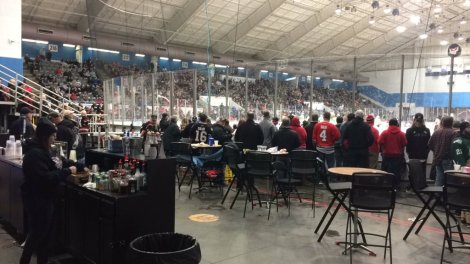 Mahfouz broke his stick against the goal, and then threw his stick into the crowd. He then walked back to the road locker room, conveniently located next to The Nest, a bar area for Thunderbirds fans. This would be an area of contention later on in this situation.

At this time as well, the broadcasters of the respective teams got into a slight verbal dispute as well.

As the Thunderbirds did a half-hearted ‘Storm Surge’ into the glass on the opposite side and continued to celebrate, Troy Passingham would continue his verbal dispute with the official, being held back by a teammate to prevent it from turning physical.

Passingham, frustrated after having a phenomenal night on the ice, would leave for the locker room, and here’s where the main story of the night would happen.

As Passingham was near steps away from the locker room, he was squirted with a water bottle and chirped by an especially noticed Thunderbirds fan. This is the moment that Passingham snapped, as he threw his blocker at the fan and ended up on top of the fan. With Passingham’s physical move, there was an unintended victim – Fran Soskin, the wife of Prowlers/Dashers/Thunderbirds Owner Barry Soskin.

From a source who overheard Mrs. Soskin’s talk with the Police for the report, made in the Thunderbirds Office, she claimed she had injuries to her back and tailbone and was “flung backwards, dragged, and trampled on”. Soskin did not press charges against Passingham.

During this time, multiple reports from people within the area of the incident say that Brandon Vuic had speared a fan – who was grabbing and holding his stick – in the ribs.

Since posting, the Elmira Enforcers have made no official statement regarding the end of the game or the incidents to follow with the officials or the crowd. The only comment thus far from the organization came from backup goaltender Nick Neidert via Twitter who stated that Passingham was interviewed by Police as well on if he’d wanted to press charges on the fan who squirted him with the water bottle.

Hey can you guys show the footage of the police officer in the locker room asking Passingham if he would like to press charges on the person? Thankfully the police did a great job with witnessing everything.

This is the third-such incident for the Elmira Enforcers franchise in the 2018-2019 Season. Earlier this season, there were reports of Enforcers players putting a man in the hospital after a bar fight in Horseheads, NY, where charges were ultimately not pursued. A game not long ago between the Thunderbirds and Enforcers was suspended (and called complete) after a ‘controversial goal’ scored by Carolina Head Coach Andre Niec (who was on a Celebrity Contract) lead to Enforcers GM Robbie Nichols pushing a linesman and being fined $25,000 by the Federal Hockey League.

Needless to say, the benefit of the doubt is out on Elmira with an incident like this. As we know both organizations from top-to-bottom were on phone calls up until even now with League Officials in getting everything squared away and figured out. It would be surprising to see Enforcers Coach Brent Clarke or goaltender Troy Passingham play in Friday Night’s potential final game of the Finals.

And in fairness to Elmira and Passingham, the Thunderbirds moving forward absolutely have to change the barrier and/or area near the away team locker room. Fans love to chirp and think they can say anything, and adrenaline can make for some incredibly foolish decisions. Passingham is 100 percent guilty, but the guilt is not alone. This fan had no right to entice a player who worked his behind off in a losing effort. And reportedly, this fan had been involved in incidents in the past in this same area. One hopes that the Thunderbirds brass will deal with him in the appropriate manner, be that banning him from the arena outright, or no longer allowing him in The Nest where he is near players as they come off the ice.

I love the idea of The Nest, but in practice it is the perfect powder keg next to a fuse. I personally spent a lot of time in The Nest because of the environment and unique view, and had a chance to talk with a few Elmira players before period two and three, but when fans are riding a high and players are frustrated, especially following an overtime game that ended in controversial fashion, massive problems can result. It is a shame that Fran Soskin as a bystander, who wasn’t even in the thick of it, had to suf

Lost in all of this, and truly the shame of everything that has occurred, is that this was one of the best games, and individual performances, in the entire history of the FHL. I fully standby and believe that. You have two of the best teams clawing, fighting, and dying to win this game. A back and forth affair with a pair of three goal leads, an intense comeback, and an awesome overtime period. Troy Passingham with easily the most Herculean effort I’d ever seen in a goaltender, after stopping 73 of 77 shots and finishing with a .960 SV%.

It is an absolute shame that this is how it had to end. The goal was close (but I do believe it was cleanly across from watching every angle, not to mention the ref in the video above gestures towards the net at the same time the light comes on), and obviously the situation was overwhelmingly stoked by the intensity of the moment, but it is an outcome like this that shows why people talk down on the league.

I noted it as it was happening last night, and after watching it over again, the situation developed for WAY TOO LONG. The Officials did the best they could handling the situation as the entire Elmira bench came over toward the scorer’s box, but I think elongating the situation any more than it needed to be turned this situation sour. I especially understand they were put into a tough situation, being surrounded by both teams while trying to confirm a game-winning overtime goal. I just believe all the teams, players, and staff were on the ice for an overwhelming amount of time that made it worse.

This has been an exciting and entertaining Finals, and I’ve definitely considered making the trip to First Arena to see history be made – one way or another – but this game is such a black-eye on what has been such a good playoffs, and what was a classic game.

All we can ask for now is a clean, non-controversial final game(s) of this series. Both teams clearly have a ton of passion and intensity drawn in, and the on-ice product has shown how passionate and fun minor low-level league hockey is. The off-ice dilemma is unfortunately the other reason why people don’t give it the time of day or the respect outside of bashing.

The Commissioner will certainly be busy coming to the end of the Cup in his name.