With the good comes the bad.

And in the world of low-pro and junior hockey, there are usually far more tragedies, stupidity, and just overall bad news than there is good news. And this past year, we had no shortage of that with teams folding, leagues folding, and loads of other terrible things.

Presented in no particular order, here are the worst, or saddest things that happened this past year in the leagues we cover.

We covered this whole saga heavily, from the day we found out about the league to its swift ending around three weeks ago, and honestly, there’s so much to write about from this league that its “Worst Of” could be an article all by itself.

By mid-summer they had just three teams, despite promising to play the season with six. Two months before the season started they had to make a team out of thin-air, putting them in a rec rink that was in no way suitable for quality junior hockey like they were promising. It only got worse from there.

Coaches quit before ever playing a game over lack of pay (this will be a theme for the league), when the games started teams had skeleton rosters that never got any bigger over the course of the year, games were randomly cancelled because of whatever excuse, equipment orders were reportedly not fulfilled, players barely got to practice, let alone play, the social media accounts were “hacked” when in reality it was the league not paying its social media team, and then it got REALLY bad.

The arenas finally got tough and locked the league out over lack of payment and failing to hold up their end of the lease, locking players and coaches out, then having to let them in so they could clean out their lockers and go back to their hometowns. All while denying that anything was wrong and blaming everyone else for all the problems the league was having.

Honestly, there’s a TON of other things that happened here, but we have other things to write about, and that’s what we could remember just off the top of our heads.

Without question, the USACHL was the absolute worst thing that happened in hockey this year.

For some reason, Berlin got another pro team

We said it the day it was announced, and so did a lot of other people, but this was always going to end in disaster.

After trying, and failing, to have a pro team in Berlin, New Hampshire in the Federal Hockey League, someone AGAIN tried to put a team in the town of 9,000 people, this time in LNAH, a Quebec-based league.

Many said they wouldn’t make it to Christmas. They didn’t make it to Thanksgiving, with the league taking over in the first week over November after just 10 games. The team averaged just 390 fans a game over its home games.

The only funny part about this was there were a handful of fans in Berlin who swore up and down that Berlin could house pro hockey, and that it was all the FHL’s fault that the first attempt at a team there failed, and that the FHL and its fans would see how great Berlin and the LNAH is. And then they got 10 games of a team.

One of the longest-tenured minor league teams called it quits back in May after 25 seasons and dwindling attendance in the Memphis, TN/Southaven, MS region.

The SPHL appeared to be riding high literally a day earlier, announcing that the Quad City Storm would be joining the league as the 11th team…then the next morning we woke up to the heartbreaking news from out of nowhere that the RiverKings were done.

It really did come as a shock despite the dropping attendance, because the team had played in the region for so long, and literally up until they announced they were folding had been selling season tickets and promoting for next year.

What likely happened is the SPHL announced an 11th team, and rather than play with an odd number of teams, the River Kings took the easy way out rather than keep bleeding money.

The owners said they were putting the team up for sale and hoping to find a local owner, but there has been absolutely ZERO news on that front or even rumor of a new owner, so hockey is likely done in the Memphis/Southaven region for the next little while.

The North Shore Knights mercifully come to an end

We seriously considered putting this in the good news column, if only because losing North Shore was the literal definition of addition by subtraction for the FHL.

For those who don’t know, the North Shore Knights were originally the St. Clair Shores Fighting Saints…and lasted one season before moving to Kingsville, Ontario for the second season.

What made the Knights/Saints so bad was that they were half a pro team in a pro league. The team would sign a handful of pro players to the roster…then round out the roster with junior players from the three teams the owners also owned in the Greater Metro Hockey League, a pay to play junior league, so they could get “pro” experience.

The Knights went 6-38 in their final season, and basically only played a handful of home games during the season, then forfeiting all remaining home games after February, then releasing every player and coach at the end of March.

When people talked about how bad the FHL was, this was the team they pointed to, and somehow they lasted two seasons.

Another head-scratcher as to how this team was ever allowed to play, the Nationals played in Cornwall, Ontario, a pretty good hockey market…that already had a team in the  Cornwall Colts of the CCHL, a pretty good junior league that regularly pumps out dozens of NCAA Division 1 players each year.

The team lasted a year and a half, and in the second season, things got really bad, when in December the team’s marketing manager wrote a letter to the local paper basically blasting the town for not coming to their games.

Amazingly, the strategy of blaming the fans for your woes didn’t work, and two months later, the team announced on February 20th that they were done, averaging just over 400 fans a game at the time the folded, despite them sitting in second place.

Because of them folding mid-season, the remaining FHL teams were all granted forfeit victories for the road games the Nationals were scheduled to play, and a travel-only team, the Northern Federals, was made to play the remaining three games the team had in Watertown against the Wolves.

If there’s one thing that players and parents have started to figure out, it’s that almost every pay-to-play hockey league is a giant scam that does very little to promote players to the next level, and only exist to get your massive tuition check at the start of the season.

Out west, the Western States Hockey League lost five teams during the offseason, and had to make an entirely new division in Canada with four teams to bump back up to 23 this season.

Meanwhile, the NA3HL is down six teams from last season, dropping from 42 to 36, including an entire division of teams that jumped ship to the USPHL. Put it all together, and the pay-to-play model faces a serious crisis.

That’s not to say there aren’t good teams in these leagues, because there are, and there are teams who do a good job of promoting players to the NAHL, NCDC, or even college hockey, but for every one of those teams, there’s probably two that are a disaster and probably should be allowed on the ice or to even have a team. 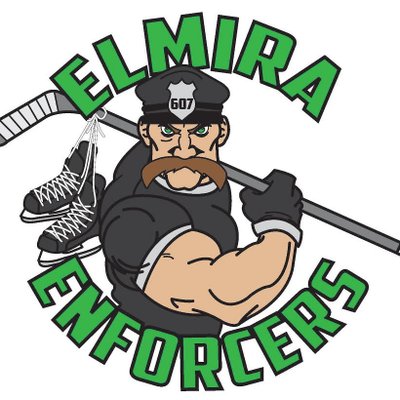 Given how strong a reception the Elmira’s new hockey team got when it was announced pro hockey was returning to First Arena, there was massive anticipation for the name and logo that were to come a couple of weeks later.

And then we got that logo.

It really was a massive letdown for a franchise that had done everything right up to that point.