Ever heard of the Lorette Comets? The HTJHL? No? Me neither that is, until we moved ( back for me ) to Manitoba two years ago. I had been lending my voice to some online broadcasts of Senior hockey in Manitoba when our producer mentioned my colleague & I needed to brush up asap on our Junior C rosters.

We covered two playoff games for the Red River Mudbugs & I was a bit taken back by the talent in the league. I mean I’m a born and raised Manitoban, how the hell was I unaware of the HTJHL THE ONLY Junior C league in the province?

The next season resumed, I had left my post with the other company and was living in the town of Lorette, Manitoba. In my lack of sincere attention skills I failed originally to notice that the Lorette Comets existed & were HTJHL members. Speaking with our neighbor I ignorantly asked if there was any hockey in town at all. Of course the Comets were mentioned.

Naturally finding out who the owner was and what coverage they had was my immediate next action. Head Coach & Owner Jesse Pelletier welcomed me on board with open arms as I began to put together their Facebook page & the take over of their Twitter account.

Little did I know, I was in for a hell of a ride. The first few times I tried to speak with players they were pretty weirded out by this guy asking for interviews and quotes post game. They never had anyone pay attention to the team like this before. Frankly it seemed that the town was supportive of the team but it was far from a primary winter interest. I still remember my first few home games standing behind the goal, camera in hand taking photos while the locals walked by saying ” who’s the Peter Parker guy” or ” look that Peter Parker guy is here again.” Why Peter Parker? I can only guess because of the camera afterall I look nothing like the web slinger himself.

Moving forward the first welcome arms from the fans/families came from the nicest people in town, Yvonne Chomini her daughters & Husband. Their son Javon played on the team, very noticable on ice as he often crushed the competition with devastating hits & some nights was all too eager to drop the gloves. This family was truly part of the heart & soul of this team, screaming and cheering with all their might, even helping me with photos they had taken of games I couldn’t make it to. For that I am thankful.

Behind the scenes the Comets were run by Head Coach Jesse Pelletier, a calm collected leader who simultaneously was playing senior hockey just down the road in Ste.Anne. Coach Pelletier was always doing something, whether it was setting up the gate for the night or making roster sheets for the fans, he was always moving a perpetual machine it seems.

The season was a wild ride with major upswings where they seemed unbeatable and other nights where I’m sure some would rather forget. Noticable players beyond the power of Javon Chomini were the speedy Brett Johnson who was like our own long haired Pavel Bure or for you modernists, Patrick Kane. Ryler Madden was the hardest worker night in & night out while Brett Bree and his small frame was a pitbull. The goalie duties were shared between Marc Pelletier & Noah Fournier, the latter the Comets rode into the playoffs as some nights despite his stats I assure you he stood on his head.

Junior C hockey in Manitoba is considered to be a graveyard for players who don’t want to hang them up, there’s no scouts, not much fanfare, minimal media beyond the odd article in the Steinbach newspapers. But folks, it’s probably the best hockey out there in southeastern Manitoba because of that. There isn’t a ton of pressure, its good honest hockey.

Sure you see the odd ex MMJHL player roll through the league, we were fortunate enough to see T.J Romanishen in the Comets Green, White & Black. Romanishen had spent some time with the Transcona Railer Express of the MMJHL. He could of easily taken his talents elsewhere but wanted to stay close to home & play hockey alongside his brothers.  Another notable MMJHL Alumni in the league was standout forward Eric Lebrun who spent two dominant seasons with the Pembina Valley Twisters yet chose the St.Adolphe Hawks to be his home. 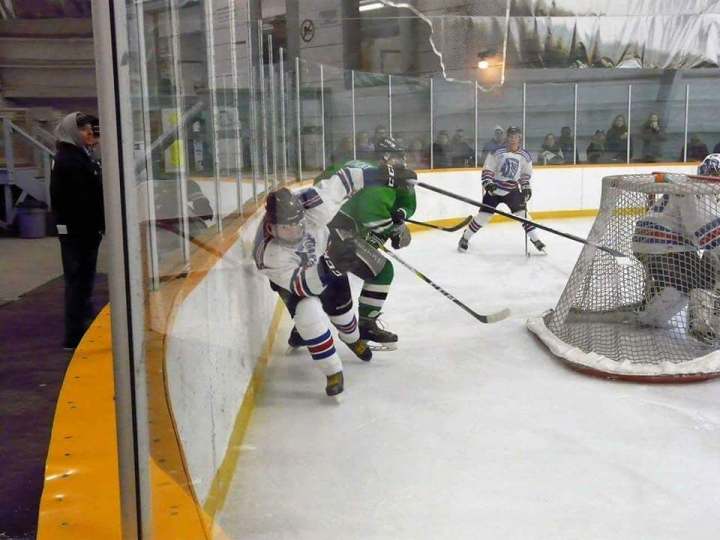 With a midseason upswing in attendance, the Comets pressed on and secured a playoff spot facing off in a dogfight with the Mitchell Mohawks who were just twenty minutes down the road. Forward Kevin Martin who had been largely silent most of the season shone through providing some major goals and momentum, frankly between him & Noah Fournier the Mohawks stood no chance.

The Comets would have a semi finals date with the Red River Mudbugs who we had a healthy battle with throughout the regular season. A back and fourth affair for the first two games, it really looked like we had them but the Bugs were just too much as they dominated the series from there on out. The Comets year was done. Summarized in near 200 photos, interviews, youtube worthy highlights, laughs and cheers.

The HTJHL season is slowly coming and frankly I wish I was there to still cover the Comets up close. So, if you are in Southeastern Manitoba, you’ve got some hockey options, six teams to choose from; Lorette Comets, Mitchell Mohawks, Red River Mudbugs, Springfield Xtreme, Steinbach Huskies & the St. Adolphe Hawks. Heck, I even heard a rumor that there’s an expansion on the horizon.

Till next time Comets fans….