What if I told you a hockey team once tried to play an entire season of outdoor games, and that that team wasn’t the Chicago Blackhawks?

This is the story of the Williamsport Outlaws of the Federal Hockey League, who went from winning it all, to losing the whole team in the span of less than a year.

The story of this team starts in Wayne, New Jersey, where the Federal Hockey League, then heading into its second season, announced an expansion team by the name of the New Jersey Outlaws.

The team was an instant success both in the stands (by FHL standards) and on the ice. According to the FHL website, the team averaged 943 fans per night during the first season, which is great for the FHL at the time and now.

And on the ice, they were even better, rolling to a 40-9-3-1 record in 53 games, winning the regular season title by a whopping 32 points (roughly 11 games in the FHL’s 3-2-1 point system), leading the league in goals scored, giving up the fewest goals, and going undefeated in the playoffs with a 6-0 record. It helps they were one of the last teams in the FHL to have an ECHL affiliation, so the Elmira Jackals sent down some very good players to help them. Some say they are the greatest FHL team ever.

But there was a problem: Their rink in New Jersey was small. Really small. While nice, The Ice Vault Arena in Wayne only holds about 600 seats according to its website, which means that every night the Outlaws played there, there were roughly 300 people who had to stand and watch the game. Not exactly a big-time arena for pro hockey that we all imagine when we think of pro hockey.

So the team left Wayne, looking for bigger and better things, and an arena that could hold more people. With no other rinks near Wayne that had the seating they were looking for, the Outlaws left the state and headed up to Williamsport, Pennsylvania, where dreams of a nicer, newer, bigger arena were waiting for them.

The town promised them a nice, new rink with plenty of seating. There was just one tiny problem: The rink wasn’t done (more on this later). So suddenly a team that went from having an arena that was too small, went to having no arena at all. (Please re-read that last sentence in a Dr. Suess voice)

So the league cooked up what might be its dumbest idea ever: why not have the team play every game outdoors? People love outdoor games! Provided there aren’t 28 of them. The league even announced they were going to hold their first-ever All-Star Game at the rink!

So the team and city turned to historic Bowman Field, home of the Williamsport Crosscutters of the New York-Penn League, a short-season baseball league affiliated with MLB. Which is about the right size, with 2,400 permanent seats. It worked out for the city as well, because while it wasn’t in use by the Outlaws, the city could use it for public skating and for local youth hockey, as well as the baseball team getting the field restored after the season. It seemed like a win-win.

Here’s what the rink setup looked like for games: 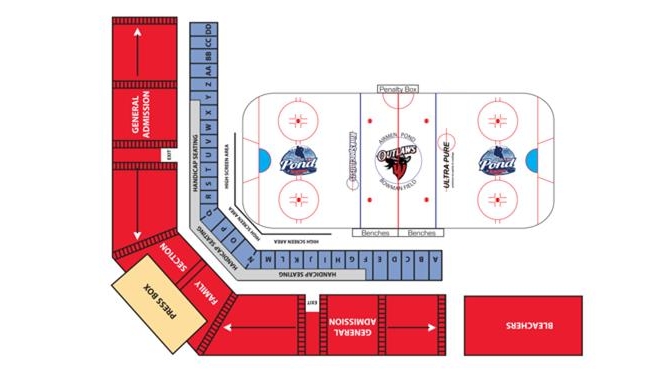 Also, if you’re interested, the website for the rink is STILL running to this day, despite the team having folded more than five years ago.

And it seemed like an even bigger success when the season finally started on October 24, for the first game against the Dayton Demonz…who didn’t have jerseys for some reason and had to wear Cincinnati Sting jerseys instead. While the Outlaws dropped that opener by a score of 5-2, opening night was viewed as a HUGE success, with more than 3,000 people, a then-FHL record for attendance, at the game on a night that saw 60 degree temperatures.

As you can imagine with playing outdoors when it was 60+ degrees, it created a unique environment, including having staff go onto the ice with squeegees to wipe down the glass, which fogged up in the heat, so fans could actually see the game they bought tickets for.

But it was all downhill from there. Despite the team being solid on the ice and in the stands, where they were averaging 1,069 fans through three-quarters of the season, and sat at a respectable 22-16-0-3, the team stopped paying its bills, claiming they didn’t have the money to play the remaining 15 road games on the schedule.

They were way in the red according to local news outlets, to the tune of having more than $240k in debts when the league finally pulled the plug on them and officially announced they were folded on January 21 of 2013.

You name the people involved in helping run a hockey team, and they owed them money. Roughly $180,000 to the people who helped make and supply the rink and the equipment needed to run it (which was already a $225,000 project in itself to get it ready for the season), $54,000 to the city for utilities and other bills, and $7,500 to the apartment complex where the players were staying. It got so bad that the mayor of Williamsport, Gabriel Campana, changed the locks on the locker room doors so the team couldn’t get its equipment out until bills were paid.

It eventually ended up with the city suing the owners of the team to try and recover that money.

The ice was basically left to melt, because it would have cost another $15,000 to break it up at the time the team folded. FHL Commissioner Dan Kirnan was part of the group that tried to put hockey in Williamsport for that season, and claims he lost more than $50,000 that season.

So the team folding left the league in a bind, because of all those roads games they were going to miss. Meaning every other team in the league was missing out on home games and the chance to make money.

The league created a traveling team known as the Pennsylvania Blues, who ended up playing only four games, going 1-3 in those games and getting outscored 28-12, finally bringing an end to their saga.

As for Williamsport hockey, well, let’s just say it hasn’t happened since the Outlaws gave it a go.

The rink that they were building to house the Outlaws in after the first season. It never got built. And even as recently as two years ago had people wondering where the rink was and when it was available, leading to this message being posted on the Williamsport Ice Arena Facebook page (yes they made a Facebook page for a rink that didn’t and doesn’t exist) in December of 2016:

I appreciate the messages I get from the people viewing the website asking if there is skating on a particular day but, unfortunately I have to inform them that the rink was NEVER built. I do not know why the creator of the site keeps the site running. I wish they would take it down. My email was linked to the “contact us” tab and so for the last four years I have been getting emails about the Williamsport Ice arena. This Facebook page remains so I can communicate to all that the ice Arena never came to fruition in our wonderful city.

Needless to say, the league hasn’t come anywhere near Williamsport since the Outlaws, with this note from the story by Penn Live linked to earlier:

Campana, whose family donated $3,500 to the project, wants nothing to do with Kirnan, saying he would not want another federal league team in the city as long as he was commissioner.

And that friends, is the story of the time a team tried to play an entire season outdoors, bailed on the rink and city, leaving behind hundreds of thousands of dollars in unpaid bills, and forcing the league to make a travel team to try and help round out the schedules for the teams that didn’t fold in the middle of the season.

The Williamsport Outlaws, we hardly knew ye, but we will never forget.