Welcome to the Bus League Buyer’s Guide, a new thing we’re going to try and do a couple times a month where we scour the internet for strange merchandise from old minor leagues and teams of the past.

Because if there’s one thing minor league hockey fans love more than waxing poetic about old teams and leagues, it’s buying shit from those days gone by. And have we got a treasure trove of goodies today to kick things off!

If you’re actually interested in purchasing these rare items, just click the big headline above the picture and that will direct you to the ebay page where we found it. 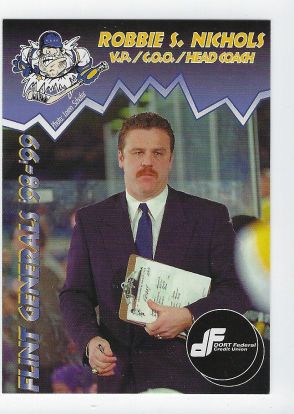 Congratulations, you are now pregnant. Really, this is peak 90s hockey cards. Weird font, strange graphics, and that really odd Flint Generals logo. My bigger question is: Who makes a trading card for the coach? Especially considering Nichols was the second coach the Generals had that season on their way to a 37-32-5 record and a second round playoff exit. I wonder if we were to buy this, if Robbie would sign it for us. Amazing thing to put on the mantle for just $2 (plus $3.50 to ship it). I’d be curious to know if anyone out there, other than this seller, has the entire 1998-99 Generals set.

I can’t lie, this is one of the ugliest jerseys I’ve ever seen. And one of just three items that shows up when you search Ebay for the Bloomington Blaze. Even more odd, the back of the jersey says “SEASON TICKET HOLDER 2012” even though the season spanned 2012-13. I’m not sure why anyone would want this, especially if they were never a season ticket holder. It’s interesting that this is an XL and makes me wonder if each fan got to choose their size for these jerseys. I have to admit, I would have been really fired up to get this as a season ticket holder…until I saw the back.

A three for one special! In this lot you get a Macon Whoopee seat cushion (remember when those were still a thing?) and TWO Macon Braves can coozies! The Whoopee of the CHL ran from 1996 to 2001, and the baseball team was the Braves from 1991 to 2002, so there’s a roughly five year window where these two teams were playing at the same time. This gets bonus points for the cushion being “The Official Whoopee Cushion.” Whoever thought of that, retroactively give them a raise. Really, this is a fun set and the can coozies especially look to be in great shape for being roughly 20 years old. ACT FAST ON THIS ONE!

Not going to lie, this is a rip-off and kind of hilarious that anybody thinks they could get $15 for a defunct business card of a team that hasn’t existed since 2001. I’d be curious to call the numbers on there though to see if they’re still active. Or to find out what Catie Stroh is up to these days, and if she’s aware that someone has one of her business cards and has it up for sale on Ebay. 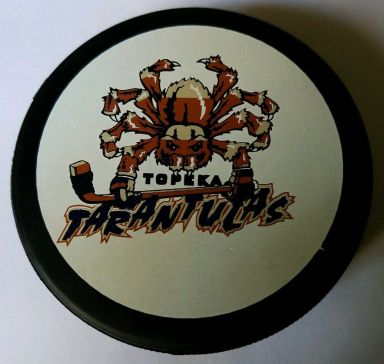 That is a terrifying logo. Like, for a family-friendly sport and team, that logo is the exact opposite. There were legit probably a handful of fans who were super excited about hockey returning to Topeka after a year off, then saw the logo and name and were scared to death to come near it. Another team with VERY little stuff on Ebay, but a puck would be a neat thing to show off. I guess when you only play one season, there is going to be very little stuff that survived. Still, at nearly 3,000 fans a game, you’d think they’d have stuck around longer, 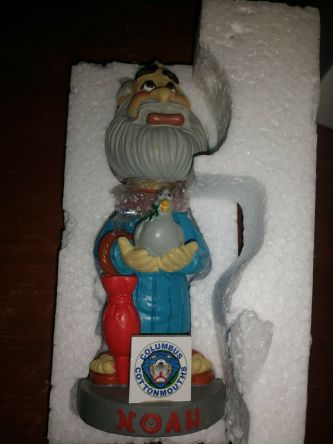 Columbus fans of this era, you’re going to have to fill us in on this one. Because a bobblehead of a Biblical figure is…really REALLY bizarre. Amazingly, there are more than one of these for sale on Ebay at the moment. I would love to hear how this became a thing or why these were given out. A bobblehead is a pretty cool keepsake to get of your favorite team or player, but I can’t imagine anyone being hyped to get a bobblehead of a guy who lived on a boat during a massive flood, and as far as we know, never played for the Columbus Cottonmouths. But for $7, it sure would be one heck of a conversation starter for any Columbus hockey fan.