With the Federal Prospects Hockey League switching to free streams on YouTube this season, there has been almost nothing but positive reaction to the move, and the streams in general.

But not all streams are created equal, and even though they’re free, there are still some things that could be better on almost all of the streams.

Please keep in mind that these rankings are fluid, because the teams only found out that they were switching to YouTube roughly a week before the season started, so they are still working out the kinks on these streams, and these rankings could change as soon as this weekend.

Also, these rankings are based solely on the view you get during the game, the graphics they have, and audio quality of the stream, but NOT on the play-by-play announcers, that’s a whole different set of rankings. We’re just ranking on, if you wanted to watch the game, which stream is the most pleasant.

Please also note that these are screengrabs from the feeds, and may not 100% reflect the actual picture you get during the feed, but are pretty dang close.

You’re probably thinking, “Well if that’s the worst then there must be some DANG good streams ahead!” And you would be half right. From that screenshot Battle Creek looks like it would have a great stream. And it is…when it works. But it rarely works and constantly buffers and lags, and then the audio is off. Not to mention that heating duct and exit sign that are in the way the whole time, as you can see above. We’ve reached out to the rink and the Bees about the streaming issues and both are kind of blaming each other so who knows if the issues will be resolved going forward, but as it is, if you can’t watch the games, you’re the worst of the bunch. Sorry, Battle Creek.

Meh. It runs smooth, has decent enough audio, but the stream has been pretty dark like you see above for both games, and then the camera being in a crows nest that’s right up against the boards but 10 feet above the ice can lead to some less than ideal views for this single-camera setup. This is another where the issues are mainly due to the arena size. Very simple graphics that only show the score. But again, runs smooth, and when it’s free, that’s all you can ask.

Notice this asterisk, and how we mentioned up above that these rankings are fluid. That’s because Danbury could be a very good stream when they add graphics. A couple members of the team reached out on Twitter and confirmed that because of the short notice, they didn’t have time for graphics during the first game. That said, it’s a very good camera view, clear, maybe a touch dark, but has clear audio as well. This could be a big riser in the rankings when they add graphics, but for now, just a plain stream leaves a lot to be desired.

Danville had its issues the first game with bland graphics, bad audio, and a bad camera view. They listened to the complaints and moved the camera up, zoomed in a bit, and added simple but easy to see and read graphics. The color of the on-ice action should be brighter, and the graphics not having a timer or period identifier hurts it, but all in all, a pretty solid stream that is more than enough to be watchable when your favorite team visits Danville. 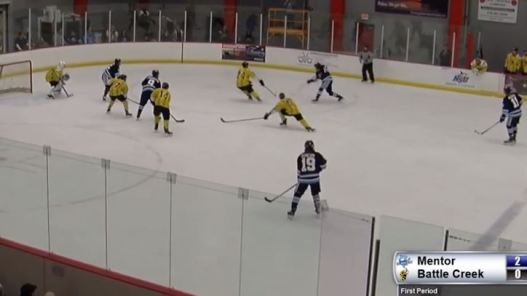 Really a pretty nice job by Mentor, and if this is sixth, then there are some pretty dang strong streams ahead. Good clean camera, excellent view that is close but not too close, simple but effective graphics that have team names, logos, and colors, as well as the period indicator. Again, for a YouTube stream, this is all you can ask for.

Port Huron is the only team who doesn’t put their games on YouTube, instead using a company called EBWtv who produces the games for the EBWtv website, and on the Prowlers’ Facebook page. And they do a great job in all honesty. Honestly, if this is fifth, it just shows you what we have ahead of us in these. They have multiple camera angles, good audio, but the view is maybe a touch dark, and probably should be zoomed in a bit so we can see the action better on the far side. Also, this loses a couple points for not having a clock graphic, but they make up for it by showing the big scoreboard in the arena after almost every stoppage so you’re always aware of the time. Nice stream by the Prowlers and EBWtv. 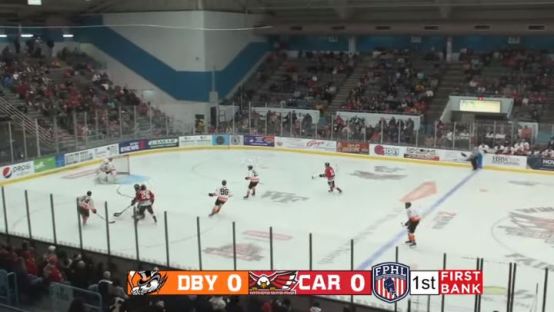 When I first fired this stream up, it was in the running for the best in the league just based on picture clarity, but we do have a couple minor complaints after sitting through the whole game. The camera probably should zoom in quite a bit, another like Port Huron where you’re so wide you are kind of squinting at times to see what happens on the far side. Great score and period graphics that really pop and are easy to read, but no clock hurts. Also, at least for me, the audio was behind by about 1 to 2 seconds on Friday. You’d hear the crowd start to cheer and the goal horn go off, the announcer make his call, and then a second later the puck goes in or a big hit happens. But overall, this is a very strong stream, just a couple kinks to iron out.

Really good stream from Elmira. Very clear, good audio, and while the graphics in the corner aren’t the flashiest, they have everything you need in the period, time, and score. They also may be the only team, at least of the top of my head, that does instant replays. But one thing that bothers me about this stream is the camera struggles to follow the puck a lot of times. The play heads back the other way on a couple passes, and the camera is behind and you don’t see the player catch the pass or what happens for a second or two after. But our bigger issues, and we get they are killing two birds with one stone, is that this stream isn’t made for YouTube. They’re taking the in-arena video board feed and re-broadcasting it to YouTube, so you miss a lot of stuff that happens after the whistle because a giant MAKE SOME NOISE! graphic or advertisement fills up your screen. But for the on-ice action, this was really tough to rank third. 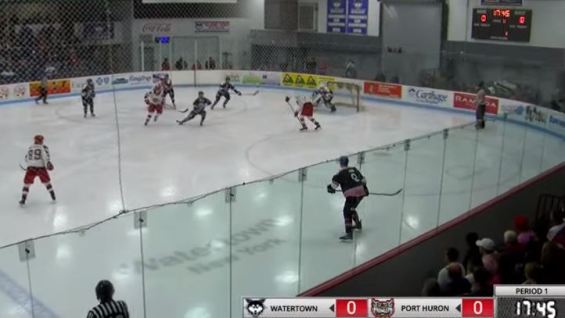 From Day 1 the Wolves have done a great job with their streams. Very clear, great color, clean audio, and then simple but clean graphics that include team logos, and also includes the time and period. Personally, we’re HUGE fans of the view in Watertown, you’re close enough that you feel like you’re almost part of the action, but still far enough back where you can see everything. The only thing that drops this to second is that protective netting that can get a bit annoying at times. But that’s not the team’s fault, and is there to keep fans safe. Really nice job by the Wolves. 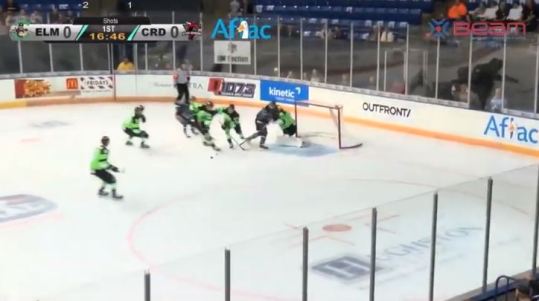 This was…wow. Really clear, and almost NHL-like camera angle that is zoomed in to the right spot, multiple camera views for during stoppages, and then a FANTASTIC graphic at the top with team logos, easy to read scores, period, time, AND shots on goal. This is a stream worthy of being on TV. They did this on Night 2 after using a simple but nice stream on Night 1 that was similar to what Carolina did, thus the asterisk. Columbus has told us they plan to have the above view for 15 games, then the others will be the single-cam setup that’s again, similar to Carolina. But when they bust out the above setup, it’s hands-down the best in the league, when it’s the single cam, it’s still really good but would probably drop down to around 3rd or 4th.

So those are our rankings, and again, these may change later in the season as teams continue to get more comfortable with them and update them, like Danbury is set to do for its next set of home games. What stream has been your favorite so far?