The emergency backup goalie is one of the strangest, coolest traditions in hockey, and you never know when one might turn up, especially in lower leagues like the SPHL and FPHL, because it doesn’t get the national attention of something like Scott Foster did when he suited up and played for the Chicago Blackhawks.

But much like their NHL counterparts, SPHL and FPHL teams often do need to turn to the EBUG, like in Macon last year when they turned to their arena finance director for a game.

Well Saturday night, the Elmira Enforcers were forced to call on an EBUG for their game against the Delaware Thunder after one of their two regular goalies injured his finger.

So let’s meet Jake Witchtowski, who got to live out the dream Saturday night as the EBUG for the Enforcers, and was kind enough to answer a few questions from us today.

Witchtowski was born and raised in Elmira, and had been going to games with his dad for as long as he can remember, with the family have season tickets to the old Elmira Jackals.

As for his hockey experience, while he didn’t ever play big-time hockey, as is the case with a lot of EBUGs in the Fed and SPHL, he has played for most of his life, and continues to today.

“I’ve played hockey most of my life and always had a love for not just the sport but the position too. I was a goalie in soccer catcher in baseball. Did some box lacrosse in college and was a goalie for that too. Just something about trying to catch or stop something from getting by me. I don’t know, but I played hockey more than everything,” Witchtowski said.

While he played hockey constantly growing up, he, like so many of us, stopped in college, not because of cost or desire, but simply because it simply wasn’t an option.

“I stopped playing hockey once I got to college cause there wasn’t anywhere remotely close that had a rink,” he continued. “I maybe played one or two pick up games when I came home for winter but that was it. And once I moved back home I just hopped right back into it as much as I could. I probably play on average 2-3 times a week and sometimes there’s weeks were I suit up every night.”

As for how he ended up getting the call to be the EBUG, even he’s not entirely sure.

“I guess Clarky (Enforcers coach Brent Clarke) must have saw one of my beer leagues games, and they Troy their starter sliced his finger open on Friday night. So they needed a guy, and he gave me a call Saturday around 2, and I called of my shift at the rink in Corning and was down there in a heart beat haha, it was an awesome night.” 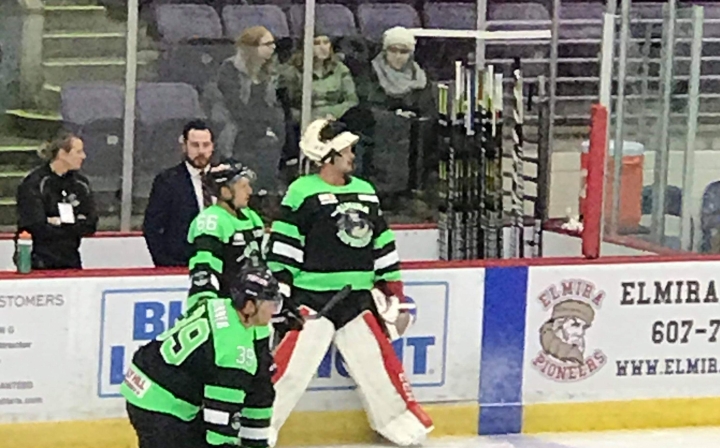 As for how the experience went, and how he was treated  in the locker room despite not being a usual member of the team, it was how you would expect hockey players to treat a fellow player.

“The guys in the locker room were awesome,” he added. “Every one of them was a great guy. Had a couple beers with a few of them after and got to know Joe Young who was the starter on Saturday. He’s a great guy and played an awesome game on Saturday.”

Witchtowski didn’t get to keep his jersey or anything, but did get to keep the nameplate on his locker, and most importantly, has a great story to share for the rest of his life.

Congrats to Jake, and if you know of any other EBUG stories across the lower leagues, absolutely shoot us a message and we’ll hopefully reach out to them for a story!