KNOXVILLE, TN – With wooden bleachers, MacGyver’d media areas, and pixelated score panels over either sideline, the Knoxville Civic Auditorium & Coliseum truly had all the feels of an old-school minor league hockey arena.

Following a 10 million dollar renovation to the facility this past offseason, the KCAC maintained its historic vibe, while taking a major step forward in the longevity and enjoyment of its outstanding environment.

The biggest part of this renovation – financially, figuratively, and literally – is the new state-of-the-art hanging video board. One which was met with great joy from Knoxville Ice Bears GM Mike Murray, in a quote given to Bus League in April.

“[We] couldn’t be more excited about this news! As you are aware, this building is 58 years old and has little-to-no upgrades done to it in that time,” said Murray “I am very proud of the fact that we are second in league attendance without any of the attributes the others have, thus looking forward to having these new toys which to enhance not only our in game entertainment, but the ability to have replays and visually expose our players to the fans more-so.”

Approval and construction of this massive in-arena upgrade – first-reported by Bus League Hockey – officially began as early as March 2019, and was slated to be finished in late October. The project was completed well-in-advance, giving the arena and team staff ample time to learn all the necessities for their ‘new toy’.

With the Evansville Thunderbolts kicking off the 2019 Southern Professional Hockey League season in Knoxville, broadcaster Tommy Pecoraro was given a first-hand look at the inaugural night of the video board. Having spent many game nights in Knoxville, the addition received a big endorsement.

“I thought it was extremely beneficial, both as a broadcaster and from a fan’s standpoint. Obviously, now we have full scoreboard view and instant replay, both great helps for the broadcast and for viewing fans. For the fans in the building, they also benefit from the replays, and they have much more opportunity for interaction; it’s a huge boost to the experience value. Of course for the club, additional revenue opportunity through on screen graphics and sponsorships,” said Pecoraro “Everybody wins, really. Knoxville was my least favorite building to broadcast in, but I think it’s safe to say it jumped up at least out of last place for me.”

The board’s main usage in-game, as touched upon by Pecoraro, is to provide live video of the game as it occurs, providing the same full-ice view for fans regardless of their seat. The biggest check on the list for every broadcaster is the never-before-had convenience of viewable time remaining, score, and shots on goal – all things previously blocked by a poorly placed light fixture to the scoreboard across the ice. Differences showcased by the accompanying photos below. 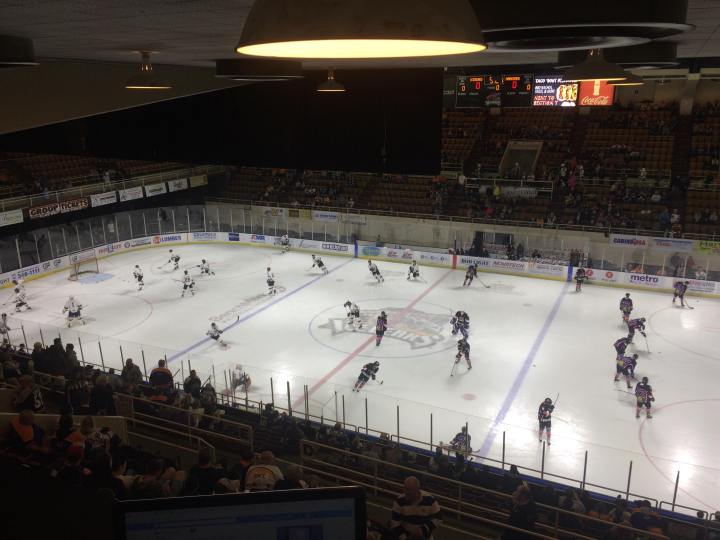 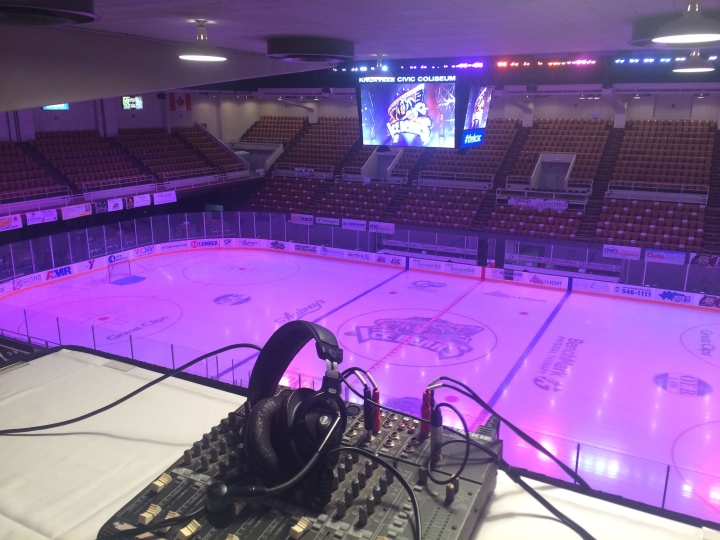 Additional uses for the scoreboard, as have been seen through the limited-number of games played yet in the KCAC in 2019, include in-game promotions such as Hero of the Game, Chuck-a-Puck promotion, replays, highlights, and a professionally-shot intro video. Fans can also enjoy the insight and commentary of Head Coach Jeff Carr in the pregame Carr’s Coffee Corner broadcast on the video board and piped through arena speakers.

All these things seem standard-fare for the lot of teams with center-hung video boards, but stand as important new upgrades to the in-game experience for Ice Bears fans and Corporate Partners.

Thanks to the renovation by the City, the SPHL has now enjoyed back-to-back Summers of team venues investing in massive video board upgrades (Fayetteville, 2018).

In a historic venue like that in Knoxville – which already boasted the second-highest attendance in the league last season – the addition of this video board showcases the city and team’s commitment to ensuring the highest-quality entertainment and experience to its fans and community.

And, most importantly, accurate statistics for the visiting broadcasters.