Last week’s release of the Federal Prospects Hockey League’s master schedule was a fairly ho-hum event, with the teams each releasing their home games, and hyping up when hockey is back in their respective cities.

But, on the schedule matrix we received, and previously posted on Twitter, one interesting thing REALLY stood out: That there were two neutral site games listed on the Matrix, with the note about them posted next to Columbus, which makes sense since their home column listed 31 games. 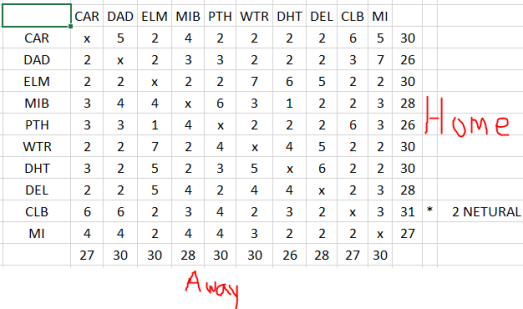 Well, with Columbus listed as being a part of both games, it stands to reason that the games would be played in the south, especially after last off-season, where talks were that the FPHL was eyeing massive southern expansion. That obviously hasn’t happened, yet, because they only added Columbus, GA in the south this off-season.

Well, after a little bit of digging and asking around, sources close to the league say that the league is close to finalizing the site of those two neutral site games, and that the cities being discussed for hosting them include Savannah (GA), Athens (GA), Biloxi (MS), and Augusta (GA).

It’s a very Georgia-centric list, with some of those four cities having hosted hockey before, so it makes sense to want to test the cheaper FPHL in markets where teams had previously failed, or growing cities where hockey is starting to take off. And the reported eye on Georgia markets also makes sense, because Columbus is as far west as you can get in Georgia, so any of Savannah, Athens or Augusta would be between Columbus and Carolina, helping ease travel and create more regional rivalries for its current southern teams. Biloxi on the other hand would be way out west, with no other FPHL teams nearby.

The other thing to consider in this is rinks, which always seems to be the problem. Savannah currently hosts the Savannah Hockey Classic, one of the biggest ACHA events of the year, at the Martin Luther King Jr. Arena, which seats about 7,200 seats. Biloxi has the Mississippi Coast Coliseum, which seats about 9,000 for hockey. Augusta has the James Brown Arena, which seats around 6,600 for hockey, but had its ice making system straight-up die early in 2013, and to our knowledge, hasn’t been replaced. And weirdly, Athens has an arena…but it’s only temporary. The Akins Ford Arena, home to the University of Georgia’s ACHA team, but a very cool setting for a game nonetheless. 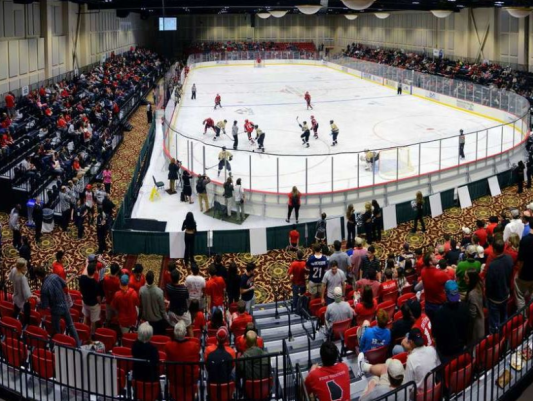 The problem with the AFA, is that the ice comes out in January, and then the team has to play across the street and outside. But, there appear to be talks of building a permanent 6,000 seat arena in Athens that could house the team in the future.

So, given what we know about each of those arenas, I think it’s safe to say that we can probably rule out James Brown Arena and Augusta, pending the ice making system being replaced, but we have not heard a peep about that, though it is possible to put in temporary systems for a weekend. And if it’s Athens, that would mean the games would have to be early in the season due to the ice coming out, so that limits the possible dates.

That leaves Savannah and Biloxi as our current front-runners. And again, to be clear nothing is final yet as far as location, but when you look at what each arena faces, it appears to that the least amount of obstacles to ensure these games happen would be those cities.

Keep in mind that the FPHL tried to host a couple games in Battle Creek, Michigan last year, but had them wiped off the schedule due to a couple issues at the arena that were beyond the league’s control.

So what does all of this mean?

Well, the obvious thing is that if you’re hosting neutral site games, you’re clearly testing the waters for potential expansion cities, and seeing what kind of crowd might come out to see pro hockey, even if it’s not their own team. And like we mentioned above, Columbus and Carolina are both kind of out on islands at the moment, so it makes sense that the league would want to put at least a couple more teams down near them for travel and rivalry reasons.

The other thing that this could lead to, should they get at least two of these cities on-board for hockey: Could the FPHL shift its divisional alignment from East-West, which makes no sense at the moment, to a North-South setup? In the North you could have Danbury, Elmira, Watertown, Mentor, Port Huron, and Danville, while the south could be Delaware, Carolina, Columbus, and then take your pick of 2-3 cities listed above. That looks a lot better than Columbus being the same division as Port Huron.

So while nothing has been officially announced, once something is, we’ll have a lot more clarity both in terms of knowing where these two neutral site games will be, and where the FPHL is possibly eyeing for future expansion in the south.