This Saturday the Rosetown Redwings will head home from Wainwright after their Allan Cup warm up match with the Lacombe Generals to play in a final home game against The Players Saskatchewan Senior All-Stars hockey team this Sunday.

Rosetown is participating in their 4th Allan Cup tournament, they were the hosts in 2012. With a good roster they stand to make some noise in this years event.

The Redwings have always been a community first organization and they really wanted to give “WINGNATION” a chance to see the boys play a final home game before they take off to the 110th Allan Cup tournament, being hosted by the Lacombe Generals.

Now, I should mention this, The Players roster doesn’t always look like this, they’re actually a very popular local rec team that “cut” their roster to load up with non-AAA senior players from around the province.

If you followed the Redwings social media accounts you would have seen some of the most hilarious posts about players being cut in the history of hockey. Scott Murdoch is one of those social media guys that’s fun to follow, great hype guy with a good taste in music for his game day videos.

Here’s what Coach/GM Trent Aylward had to say:

“The Players All-Stars are really excited about this game. We’ve got guys coming in from six different leagues around Saskatchewan. Mostly young former SJHL like Kyle Donaldson (Kindersley Klippers), Braiden Lacoursiere (Unity Miners), Zach Douglas (Elrose Aces) and Ryan Rothenburger (Radisson Wheatkings). But then of course we have a good mix of veteran guys like Russell Goodman (Naicam Vikings), Tory Allan (Davidson Cyclones), Dylan Smith (Biggar Nationals). We have a great goaltender in Steve Glass (Warman Wildcats) and of course what would an All-Star game be without  legendary Redwings Heath Pearce to help him out.”

A major standout in that lineup for our American readers is Tory Allan who played for the Columbus Cottonmouths back in the day.

This game is going to be high energy good family entertainment and a great way to celebrate the Redwings season so far. It also features a guaranteed $5,000 CDN 50/50 that you DO NOT have to be in attendance to win. So get down to the Bannerbarn and cheer on these two teams this Sunday night.

Going back to the Allan Cup for a moment, Rosetown fans, single tickets will be made available as of the 26th. Get them while you can, pack the car, pack the kids and get down to Lacombe to cheer on YOUR Rosetown Redwings! 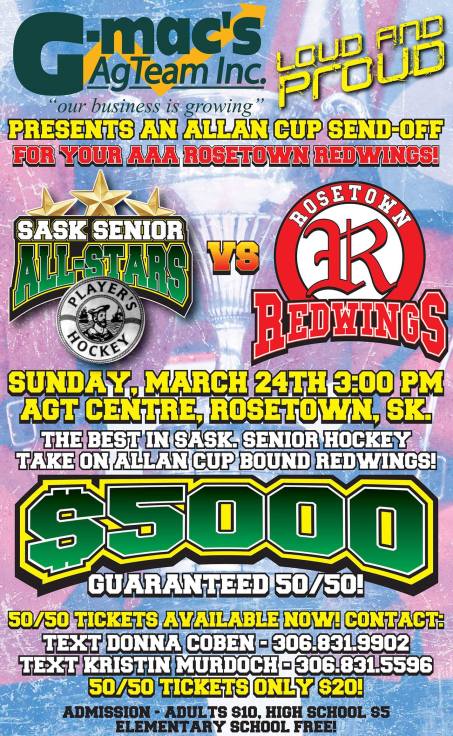