Friday night at the Innisfail Arena, the full house watched a entertaining battle of wills between the Lacombe Generals and Innisfail Eagles, in what turned out to be one of the stranger playoff atmosphere I’ve ever witnessed in hockey.

The Eagles, led by former Jack Adam’s Trophy winner Brian Sutter had their backs to the wall in the best of five series down two games to none. It hadn’t helped the Eagles that their star goalie, Allan York, who was injured following Game 2 of the previous round, was held out of the entire series against Lacombe.

In the other locker room, Lacombe Head Coach Sean Robertson kept things calm in the Generals locker room reminding the boys to, “push the pace, don’t wait for something bad to happen to start playing.”

Joe Vandermeer responded for the Eagles with under five minutes to go in the first on a seemingly misfired shot that snuck it’s way past Generals goaltender Mike Salmon who was seeing his first action of the ACHW playoffs.

In the second the Eagles were awarded a power play after goalie Salmon was assessed a two minute high sticking penalty. Colton Hayes scored on a long shot that got the right bounce to make it 2-1 for the Eagles.

The Eagles had five second period power play opportunities but only managed to get a single goal as the Generals continued their dominance on the penalty kill.

Coach Sean Robertson added, “The turning point for us was in the second period, our penalty killing was outstanding, the boys fed off of it, it gave us confidence.”

The Generals would return fire with goals scored by Kyle Stroh and Billy Marshall. Mike Salmon stopped seven of eight shots to help keep the Generals in the lead going into a rather penalty filled third period. 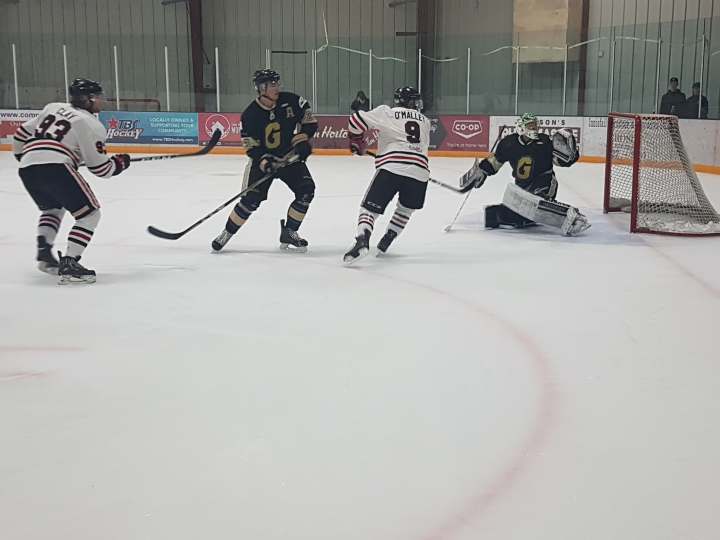 Levi Nelson came to life in the third, his spark was lit earlier in the game when the Eagles tried to shove him over the boards into their bench while taking a few liberties with him along the way.

Nelson struck the Gens fourth goal at the 17:56 mark & again just moments later due to an attentive team bench as Levi had his stick slashed out of his hands, the bench got him a stick on the fly as he caught up to his teammates in time to get the last touch to make it 5-2.

The Innisfail Eagles penalty box door was very busy in the third seeing seven players make the box their home, all but Chad Robinson would do so, he was assessed a ten minute game misconduct which ended his night early.

The third period was one of the oddest atmospheres I’ve ever personally seen at a hockey game. The home crowd in Innisfail was eerily silent throughout, almost accepting their fate that the ACHW title was not to be theirs. Add-in the fact that the person in charge of the music played some of the weirdest music I’ve ever heard, seriously, did not recognize one song, and you had a building that literally had be silenced.

With that weird tone set, Evan Oberg and Billy Marshall would score two third period power play goals to cap off the Lacombe Generals seven goal night, and while the Eagles did manage to score two more goals late, it was for not as the Generals were able to hold onto a 7-4 victory.

Kyle Stroh had a goal and two assists, Levi Nelson scored two and assisted on one goal giving them each three points on the night.

The Eagles finished the game one for six on the powerplay, the Generals managed to score twice on nine powerplay opportunities.

Up next for the team is to compete for the MacKenzie Cup for the Provincial Championship.

However their opponents have yet to be determined as the Innisfail Eagles season is not yet over, and they will now face off against the Stoney Plain Eagles in a best of seven series to see who goes on to play in the Allan Cup and compete against the Generals before hand, in either a single game showdown or a best of three series for the Provincial crown.

When asked about about the Mackenzie Cup, Coach Sean Robertson said, “The Provincials for us is very important. We have a lot of pride in winning Alberta. We want to keep our momentum and earn our way into this tournament so we will be prepared for whoever we face. Business as usual for us, we are building towards something so we’ll keep the pedal down. ”

Stay tuned to Bus League Hockey as we will be updating you on the Mackenzie Cup dates and games along with our extended coverage of the upcoming Allan Cup being hosted by Viking Projects LTD, the City of Lacombe, and the Generals. 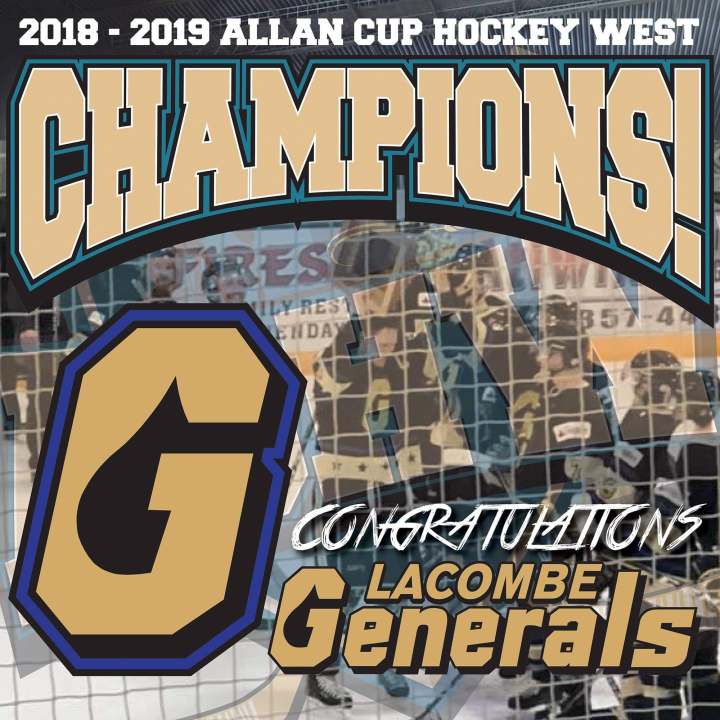