Tonight in Allan Cup Hockey West action, the season could come to a close as the Lacombe Generals are up two games to none over the Innisfail Eagles in their Best-of-5 series for the ACHW Championship.

This season has been an interesting one for the Generals, outside of the normal ups and downs of hockey, the team has played the majority of the season with a short bench. However, the coaching staff, led by Head Coach Sean Robertson, have pushed this team to within one game of another Championship on their road to hosting the Allan Cup this April.

Sean Robertson is no stranger when it comes to Championship games, during his active playing career he won his first Cup in 2003-04 with the Muskegon Fury of the United Hockey League, before joining the Colorado Eagles (CHL), winning three division championships, two conference championships and two Ray Miron Presidents Cups. Two of his teammates during his time with the Eagles are now past and present Lacombe Generals players Ryan Tobler and Tyler Weiman.

Robertson would eventually suit up for the Bentley/Lacombe Generals for a decade earning a number of Chinook League Championships and three Allan Cups.

His transition to becoming a Head Coach started in 2015-16 when he would join the Calgary Dinos as an Assistant Coach learning from highly reputable Head Coach Mark Howell who is well known in the CIS circuit. Under his tutelage Robertson worked for two seasons which opened his eyes to seeing the game from a different approach.

Behind the Generals bench this season he is joined by Devin Olsen, Ken Richardson of CHL fame & Goaltender Coach Andy Nowicki formerly of the LA Kings.

We asked Coach Robertson how he’s felt about the teams performance so far in these playoffs.

“We are trending in the right direction,” he said. “We wanted to get our goals against down. We have a number in mind that lets us be successful and so far the proof is in the pudding. The full roster helps, but also the buy in to play the right way is there also.  From my experience our playoffs have always been two separate animals:  A) We need to get out of Alberta and our league which is basically a no holds barred war and B) The Allan Cup is a completely different animal where you have to mind your P’s and Q’s.  Quite a contrast. We know what it is and have dealt with it before so (you) deal with the task at hand but also understand what we need to do to win our last game of the year.”

One of the keys that fans and players have noticed so far has been the play of goaltender Tyler Weiman who has been tremendous in goal.

“Wimes has given us a shot in the arm,” Robertson added.  “His demeanor and business like attitude is a breath of fresh air.  Our group loves how confident he is.  He understands the situation.  Our dmen love how he plays the puck, its saving wear and tear on them going back for pucks. Tyler is a real calming prescience.”

“Levi plays with a lot of emotion and keeps coming.  He has a passion to win and it shows late in games.  Will make mistakes but can’t fault him because he plays so hard.  Doesn’t really know any different.  He is a playoff performer.

“Nowakowski is a dynamic I don’t think anyone else has. He closes the gap on forechecks & has breakaway speed. Dylan is fearless for his size and battles hard against anyone no matter how big or strong. He’s been very effective for us down the stretch & has played some of his best hockey for us these playoffs. Overall we expect a lot out of ourselves and each other. This group has a lot of pride and will battle for each other.”

The Lacombe Generals & Viking Projects LTD are hosting the Allan Cup April 8th-13th 2019 reserved seating packages are available along with rush seating. You do NOT want to miss out! 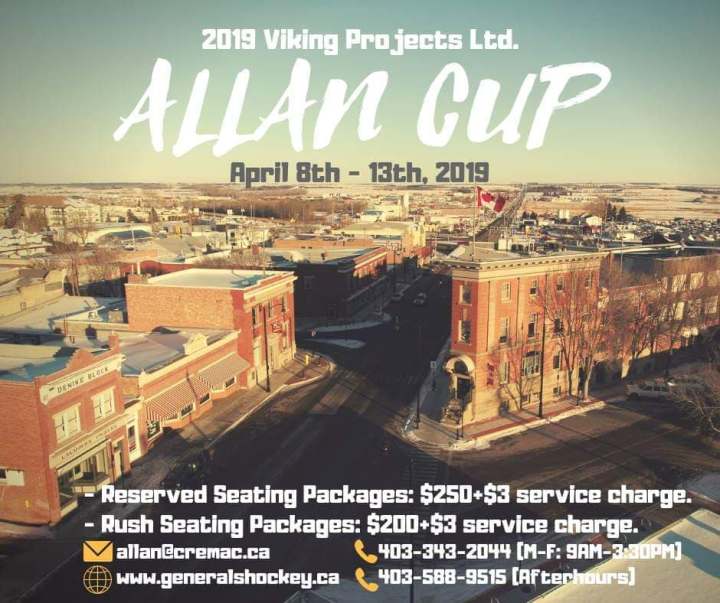