Hockey fans love to debate and question the quality of other leagues, it just comes with the territory of a sport that has TONS of leagues across North America and the rest of the world.

Well, today one FHL fan name Joe, who is either new to hockey or has somehow never heard of the KHL, dropped this gem today in the Carolina Thunderbirds Fan Group, on a post about Mathew Maione singing and playing guitar at the KHL All-Star Game a couple weeks back: 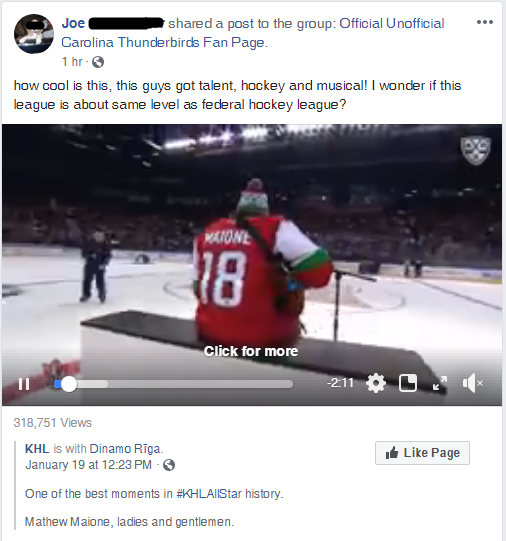 Needless to say, there was much hilarity to follow in the BLH group chat about wondering if the KHL and FHL are on the same level, including:

“Could a team of KHL All-Stars beat an FHL team? MY COLUMN:”

“How would the KHL do in the FHL? Why the answer is bad:”

“Is Pavel Datsyuk good enough to play in the FHL? We investigate.”

“Can President Putin score in a FHL shootout? Find out tonight at 8.”

And really, those are fair questions to ask, because if the KHL won’t come over and play the FHL, how will we know which league is better? How come Pavel Datsyuk has less career FHL points than Ahmed Mafouz? And how come none of these so-called great players in the KHL have a Commissioner’s Cup? I can’t help but think the debate for which is the better league is still up for debate.

God Bless the FHL and its fans for bringing us this bit of hilarity today.