One of the more head-scratching moves in recent SPHL memory was announced Wednesday, when the Pensacola Ice Flyers, looking to inject a little life into their lineup to get back into the playoff race, announced the signing of defenseman Jason Price.

Price, as some may recall, was made infamous when during a game against the Huntsville Havoc when he played for the Knoxville Ice Bears, where he allegedly fired a puck into the Havoc bench on purpose, hitting a trainer, setting off a brawl on the ice, and subsequently was suspended by the SPHL until further notice.

He applied for reinstatement last season, but was ultimately denied by the SPHL.

Price, prior to the incident and suspension, was a productive player in the SPHL, routinely chipping in 20+ points per season from back on the blueline, including a pair of 30 points seasons in 2008-09 with the Richmond Renegades, and a career-high 35 points in 56 games with the Augusta RiverHarks in 2010-11. He also had two stints in the UHL/IHL 2.0 earlier in his career, playing in Port Huron, Muskegon, and Quad City.

As if the signing of Price wasn’t controversial enough, it turns out, maybe it shouldn’t have been the Ice Flyers who were able to sign him. According to one source close to the SPHL who asked to remain confidential, teams were not informed that Price’s suspension had been lifted, and should have had to pass through waivers first.

“The league never informed ANY team that he was lifted from his indefinite suspension,” our source said. “And when he was lifted, he should’ve had to pass through waivers. Teams never knew and never had the chance, and the commissioner has no explanation as to why this is the case. It’s (his signing) been heavily disputed by multiple teams.”

The big about the commissioner not having an explanation for both why his suspension was lifted, and why other teams weren’t made aware raises a TON of questions, mainly, did they not want to make it public that he was cleared? And did they sort of have a fix in to ensure that he ended up back in Pensacola?

As if all that wasn’t enough, one reader and guest contributor @SPHLrando, pointed out the Ice Flyers have gone onto the team Facebook page, and have deleted negative comments about the signing, and comments that brought up the incident, his suspension, and the denial of his reinstatement from last season.

All screengrabs below are courtesy of @SPHLrando. 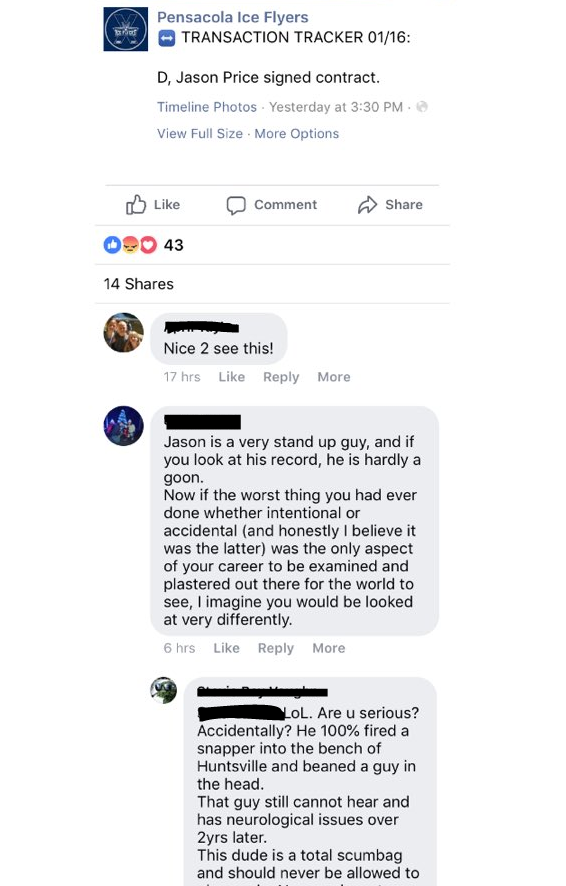 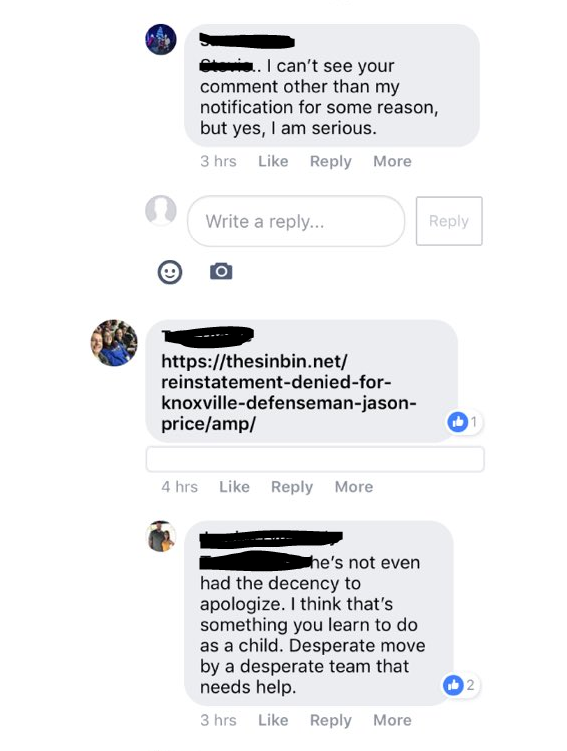 The deleting comments is a time-honored tradition in sports, especially at the minor league level where teams control 98% of all the information about them that is released to the public. We saw it this year when USACHL’s teams were sinking, and the Rio Grande Valley Killer Bees deleted comments from their page after fans complained about a 3 on 3 “game” they paid to see.

And if the Ice Flyers are deleting comments about the incident, or from fans angry about the signing, they probably shouldn’t have gone and signed him in the first place, which again, was reportedly done by very shady means and has multiple teams disputing it.

We’ll keep our eyes and ears posted for any updates from the league, or the Ice Flyers, but if we had to guess, I wouldn’t plan on seeing Price in a Pensacola uniform anytime soon.

Regardless, the league has a mess on its hands with unhappy teams who are either unhappy that his suspension was lifted, or that they were not made aware of him being eligible and therefore missing out on signing him. While the Ice Flyers have a mess on their hands with fan backlash and deleting negative comments about the signing from their social media pages.

Who knew signing a defenseman in mid-January could set the SPHL World on fire?