One thing we love about this site is the fan outreach and interaction we get from posts on the site, as well as our posts on social media. And every now and again people reach out asking if they we can post something they’ve written about thoughts they have on low-pro or junior hockey.

So today you’re getting a guest post from one of our readers and Twitter followers, @SPHLRando, who is a fun follow and a pretty good source of hockey info, so if you haven’t, go ahead and give him a follow!

Reminder, the views reflected in this do no necessarily reflect those of us here at Bus League Hockey.

A word that has scared minor league hockey fans for years. It is a sadly common practice, leaving fans wondering what they could have done to stop a move. So today, I’m going to do the exact thing and scare fans, and talk about possible SPHL relocations! This is going to be great fun.

The three teams that I consider most likely to move:

Macon: Have been in Macon for 3 years, organization has been in the league for 6, average attendance so far this year is 1,828, have won one cup, projected season attendance of 49,744

Evansville: Have been in the league for 2 season, 3 after this season, average attendance of 2,315, no cups, projected attendance of 58,754

I can already see the replies, “Uh, why is Pensacola on the list, they have good attendance?” Yes, they have good attendance, but there home has a known history of uh “being special.” With problems including that they need a new ice plant because theirs is a mess, and the fact the city will not give them a new one. “So what are the cities that they’ll move to then?” you say, well, funny you ask I happen to have three that I think would be perfect for the SPHL.

Biloxi, MS: Formerly home to the Rail Yard Dawgs, the Surge have a special place in my heart, as the Havoc (Woooo) and the Surge garnered national attention for a full on brawl back in 2012. The Surge ended their last season last in attendance, but they had a higher average then Macon does currently and currently neck and neck with Evansville. If the arena still has an ice plant, Biloxi should be back on the SPHLs radar.

Owensboro, KY: A name that will be familiar to Evansville fans, as the Icemen were originally going to relocate to Owensboro. So why not take advantage of a city that wants a hockey team and give them one? 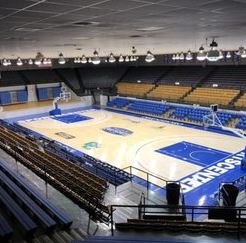 Lafayette, LA: Mike Campos will be very excited to see me mention this town. The Ice Gators folded in 2017 because of arena renovations, but the renovations are done, and it looks great.

Though the Ice Gators finished second to last in attendance in the 2015/2016 season, they are beating Macon and just behind Evansville. Just one suggestion, just change the name.

Three cities gone, three cities added. Fans will be upset, fans will be happy, but we have to remember this is a business, and fans can’t stop everything.