We had such a great response for our Reader Questions during this week, that many questions came in past the deadline!

Not wanting to disappoint, we’re doing a separate post all for these great bonus questions.

Without further ado, here are the extras.

This is an really tough, interesting question As it is right now, the guys aren’t because they receive a stipend from the OHL, that is enough that it ruins their eligibility.

What I wonder, is if going forward maybe the league makes it an option where you could play without receiving the stipend so you’re both playing in the world’s most scouted junior leagues AND keeping your NCAA eligibility for future play. Or maybe the NCAA gets its head out of its ass (not likely) and realizes that the pittance they receive shouldn’t be enough to rule them ineligible.

Because, let’s be honest, for all the top-flight prospects that the CHL leagues bring in, there are many more who never get a sniff of the NHL and maybe toil away in the lower pro leagues, without an education, and basically only knowing how to play hockey.

Either way, something is going to change soon, because players are already going after the league trying to get fair compensation for the skills they bring, and if the courts rule that they should be paid fairly, the entire structure of those CHL leagues is going to blow up.

Oh man. This question is incessantly tough. I’ve been around the OHL now for the last few years thanks to the Flint Firebirds, and I’ve seen the impact that this league has.

I mean, these guys are NHL prospects on display, and the amenities and facilities are INSANE. If you get a chance, check out the Dort Federal Event Center walk-through that the Firebirds put up.

Now, the problem with the CHL is it’s a weird middle ground. Not pro hockey, but definitely not amateur hockey. You’ve got the highest level prospects arguably in the world playing here, and sometimes transitioning seamlessly right into the EC/AHL.

The reason this has to come into question, is because technically there is compensation for the players of the league, in the form of an Education Package, which focuses on providing these young guys (16-22) access to schools, supplies, and petty cash for “phone bills and movie nights” for example, as it covers all the necessities without any financial burden to these development guys. A billet family is of course provided too, but that’s typical of junior hockey.

I don’t believe that this should be enough to deem them ineligible for the NCAA. Yes, they’re getting compensation, but it’s in the form of necessities for long-distance-from-home hockey players playing in a essentially a professional hockey league. Not every guy there will make it to the NHL, but how can you pass up the chance to be fast-tracked?

NCAA Hockey teams are allowed to giveaway athletic scholarships, which in a sense is a form of compensation, but even that is more rewarding per season than the OHL’s package that we linked to of $470/month.

Yes, I understand that the scholarship is more education-based and selective, but in sports like basketball or even football they’re rarely used for that, and even in some instances of hockey it’s a rarity.

It’s foolish to turn down the PR blitz of having a former CHLer join your league, considered second-best in development next to the CHL. 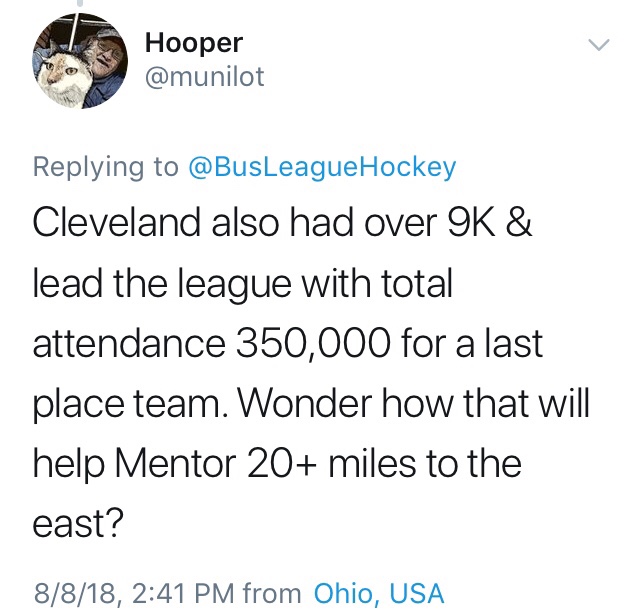 Well, the biggest reason I think people will go to the games in Mentor versus driving the 30-40 minutes to Cleveland is price.

The Ice Breakers have the cheapest season seats in the league for a side seat, coming in at something absurd like $7 a game if you’re a full-season ticket holder. And shoot, even if you walk-up, the prime seats on the side of the rink are just $10.

So I think the biggest draw for Mentor is they can say to a family of four, “Hey, you can all can get in for $40.” Add in cheaper snacks and souvenirs, and a family of four can go to an FHL game for well under $100. Meanwhile, in Cleveland, you need $100 just to get the family in the door, and that’s not counting parking, snacks, souvenirs, and then the drive to and from.

This has been the great debate since the feasibility of Mentor first came about in our article back in May. Many have asked “why would I see crappy low-level hockey when I could drive a half-hour and see an AHL team?”. That’s a fair question!

However, the Mentor/Lake County area is where the team will really be trying to hit. With tickets at incredibly low prices, a grippingly good logo, and alcohol flowing pretty freely in the Mentor Civic Arena, it honestly sounds like an interesting combination that can work.

Federal Hockey in Ohio certainly needs a facelift, and if Mentor can draw good crowds and survive, they’ll get it. I don’t think you’ll get much of any support from Cleveland, unless you have a killer promotion and a real reason to drive fans in.

Personally, I would love to see the UHL come back, but based on our research, that doesn’t appear to be happening any time soon.

That said, I would love to see the CHL or WCHL, because it’s really odd that low-pro hockey just suddenly stops at the Mississippi, and that the NAHL stops at Texas. We’ll get into this more in another question, but it seems like there is a void in the central and western parts of the country for pro hockey.

We’re both huge International Hockey League junkies, and grew up watching it and going to games constantly. The idea of having a league where Port Huron, Flint, Saginaw, and Muskegon are all together as rivals again is so enticing, and the entirety of the Midwest being involved in massive seasons is outstanding.

The IHL or Central Hockey League returning would be the best-case scenario. Why? The nation needs an independent AA/AAA hockey league, something that feeds directly to the NHL without the necessity of affiliation, and gets fed to from the FHL/SPHL.

Fast-and-loose high-level independent hockey sadly will likely never come back, but that would be by far my first choice in leagues to bring back. So many great organizations ended up coming from the two leagues, and many great memories for me from the IHL.

I watched quite a bit of SJHL hockey last year, and it was a fun league to follow. I think everyone has eyes on Nipawin after their insane season that saw them win the regular season crown by 7 points.

That said, I think I’m going to take a finals showdown of Melfort  and Battlefords. Two teams that were nipping at the heels of the Hawks, and were right there as far as peripherals like goals for, goals against, and goal difference.

If you made me pick a sleeper, I think the Notre Dame Hounds could sneak up on teams, they had 20 wins on home ice last season despite finishing last in their division, so if they can play even a little bit better on the road, they’ll be right in the thick of things for the Canalta Cup.

Ah, yes. The Saskatchewan Junior Hockey League is one of the most fun junior leagues out west, and with so many great teams, it’s always a hotly contested league.

The story going into this season will of course be the returning Humboldt Broncos, and the strength and resiliency the community will showcase headinginto the season.

My sleeper pick is the Weyburn Red Wings. A middle-of-the-road team last year in the regular season and in the playoffs, the WRW got hit with two tough losses in overtime in the playoffs.

And of course, the best team in the SJHL, who we all can’t wait for, is the YORKTON T-DAWGZZZZ BABY. 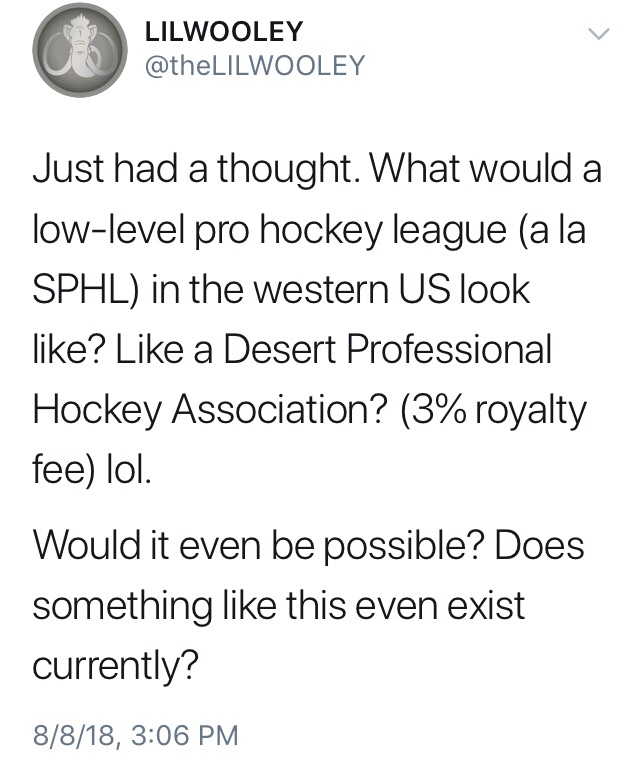 (Disclaimer: while this initially wasn’t directed at us, Lil Wooley did tag us in the follow up)

We kind of got into this discussion on Twitter yesterday, and as far as I can tell, and like I mentioned above, so many of those teams that were in WPHL or WCHL have now had their cities taken over by junior leagues, or they lasted long enough to make it to the AHL or ECHL.

That said, I really think you could have an FHL-style, and maybe a SPHL-style league out west, but the biggest challenges are what markets are available, and then how far apart the western cities would be. I don’t think you could make it southwest like New Mexico, Arizona, California, Nevada, just because there aren’t enough cities nearby that it would work.

And I don’t think it would be northwest, because all of those cities are spoken for by teh WHL.

So that leaves something like the Big Sky Hockey League, where you have teams in Montana, Idaho, and Wyoming. And you’d pick towns that have 30k+ people in them, where they’d be the only show in town, so you might be able to draw the 1000+ fans you need like in the FHL.

Off the top of my head, you could have these cities with teams: In Montana you could have Billings, Bozeman, Butte, Missoula, Helena, Great Falls. In Idaho you could be looking at Idaho Falls, Pocatello, and Twin Falls. Wyoming could have teams in Casper and Cheyenne. Maybe even a couple teams in Utah in places like Ogden, Provo, or Orem.

Those are all decent-sized towns that I think would get behind it because of the regional rivalries. But most of those towns already have teams in the trash NA3HL or the even trashier WSHL, and most probably don’t have rinks that would be big enough to suit a pro team.

That said, there should be some sort of pro hockey for people out west.

I honestly don’t underrated WHY there isn’t a western-focused professional hockey league. The SPHL succeeded because it integrated into a hidden hot-bed and became part of the hockey boom in the Mason-Dixon before Nashville became the legendary hockey community it is.

The untraditional hockey market success started out west, when Gretzky headed to LA. Since then, all of California has been hockey tapped, Arizona has held a team AND grown to college hockey, Texas is on the verge of having two teams, and Colorado is the Michigan of the west for hockey. Not to mention a little town having minor success heading into their second season…the Vegas Golden Knights.

The brand of West Coast Hockey is experiencing a Renaissance because of Vegas, and with teams in San Jose, LA, and Anaheim all experiencing massive success in the regular season and heading into the playoffs this decade, you’re seeing it just grow bigger and better.

With college hockey and high-level professional hockey finding a home, all it’s going to take is a Scott Brand out-west who will integrate and create an ‘A’ league that will range between the PNW down to Texas. There’s untapped markets, but somebody has to take the risk. They have to go on their own Oregon Trail of western hockey.

Why independent pro/low-level hockey stops at the Mississippi River is beyond me. The CHL was the last time it happened, and it’s been years since there’s even been a sniff at the idea.