We’re back with another edition of the Bus League Hockey Reader Q&A and we’re probably going to get in trouble with this one! The questions were good, and again were mainly towards hockey, so we did our best to answer.

Let’s get right into it.

ROVITZ: Dan, you’re going to get us in trouble. That said, great question! I’ve voiced my opinions on this before, and my pick of the current six teams is Watertown. They’re kind of out on an island, and have seen fan support dip over the years, including less than 700 a game last season, and are the only team who doesn’t have local ownership or Soskin behind it, so all signs would point to them. But I think there is hope in Watertown with no North Shore on the schedule, and a new New York rival in Elmira. Beyond Watertown, MAYBE if you squint hard enough you could see Danville having issues, mainly because they are just so far from the rest of the FHL teams.

This is a tough one, but I have to go with Watertown based on their conditions with those listed in the question. Watertown is league-owned, has just a one-year lease, and the lowest attendance in the league. That makes it the most likely, but I don’t think that means the relocation bells are chiming yet. The team has great promotion and a really well-ran front office. I think attendance will increase this year with everything in consideration.

ROVITZ: John is of course talking about Ahmed Mafouz, the all-time leading scorer in FHL history, who started last season with Cornwall and then ended the year in Danville after the Nationals folded in the middle of the season. From all indications, the FOUZ, will be back in Danville, as they still hold his rights from last season, and according to the FHL transactions page, he has returned from suspension. So barring a trade to maybe Watertown so he can be closer to his family (that was why he ended up in Cornwall), I would venture he’ll be sporting orange and black this season.

Ahmed Mafouz is a legend, and I’d be shocked if he stayed with Danville this whole season. Somebody is going to come knocking on the door for him that needs a scorer and the publicity. I have this really weird feeling that Elmira will get him from the Dashers. Mafouz will want to play for a team that could really compete or even hypothetically get moved to the next level. Elmira, and if not them, Watertown.

ROVITZ: Dammit, we’re going to get in trouble for this answer too! That said, I don’t see this league lasting more than one year, and that’s if it even gets off the ground this season. At the moment they only have three confirmed teams, and are aiming for a late-October start, which doesn’t seem good given that that is less than three months away. They said they were hoping to add up to three more teams in the coming weeks, but that was three weeks ago and there’s been NOTHING. There was talk that Dodge City, KS was the next team to be added, we reached out to the league…and nothing. So I wouldn’t bet on this lasting long. Shoot, even if it does play this season there’s a good chance it doesn’t make it to the end of the year.

And to answer what I think of the USACHL: I think it’s a good idea. Any tuition-free league is good, because the last thing hockey needs is another pay-to-play scam league, so the intentions are good, but I just don’t see this project doing well.

This is so odd. They’re getting a ton of legitimate front office staff, and it appears like all the teams in the league are owned by the league. I cannot seriously think of this league as anything more than a leverage-league to try and get consolidated into the NAHL Southwest to survive. I mean, the league is getting started mid-late summer, and has no players yet, but is holding camps in Ottawa and Chicago. I’m doubtful of where funding is coming from, where fans will come from, and what the actual quality of product will be. I’m incredibly doubtful that this league will last the year unless it markets the hell out of itself, which, if you haven’t noticed, it hasn’t. 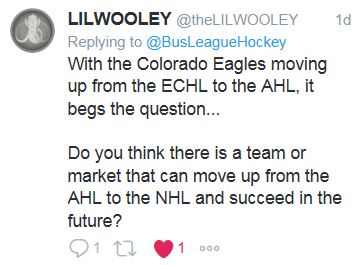 ROVITZ: Oh this is a good question, and kind of a weird one. Colorado “moved up” not so much because they were amazing in attendance, but out of necessity so each NHL team has an AHL affiliate, and I just don’t see the inverse happening where we have 32 AHL teams, and need a 32nd NHL team so they have an affiliate. But to answer your question, of all the current AHL teams and cities that COULD possibly make the jump, there’s only one that seems possible in my mind: San Diego. The Gulls led the AHL in attendance last season at more than 9000 fans a game, and have proven they can support a major league team with MLB and NFL teams being there for long stretches. But there are issues, mainly the arena. San Diego’s current barn only has about 12,000 seats, and you’d probably need MINIMUM 5,000 more seats for the NHL to consider it. But the arena is old, and maybe San Diego somehow finds a way to build a new one (or a rich person builds a new one), that has say, 18,000 seats. That said, you’d still need another 6,000 or so fans a night for it to potentially viable. It’s no secret that Seattle is coming to the NHL so they’ll probably sit at 32 a long while, but if the league ever wanted to be 34 or more, maybe San Diego gets bumped up, provided they have a suitable arena.

I’m not doubting the plausibility. The Charlotte Checkers moved up from the ECHL to the AHL almost 10 years ago, and they’re thriving. The only reason we don’t know if it’d work is because it hasn’t been attempted in the modern era. But remember that the A/ECHL picked up the best tenants of the IHL, UHL, and CHL and have thrived with them. I think in well-established hockey markets, you’d see success and high plausibility. I’d even venture as far as this: Fort Wayne. They’re an ECHL team drawing AHL+ numbers. There’s no NHL team in Indiana, and Fort Wayne is in an area closer to many big population areas than you’d think. I could see them retaining a lot and getting even more fans in a hypothetical jump. IF the transition were done right. An AHL team could transition though, and someday should.

ROVITZ: The International League has quite a wild card race on its hands, a look at the standings as of this morning shows that the races in the South and West are tight as well. But to answer your question about if the West will get the #2 Wild Card, I think they will. Right now there is a three-way tie for the wild card, with Toledo only 0.5 games back, so they have two shots at getting it among those four teams. So the odds just seem in the West’s favor that at least one will find a way to get it done and claim that spot.

The Toledo Mudhens are riding high right now. They’ve been on a great win streak, and under skipper Alan Trammel look to steal a playoff spot. Two big series ahead, the finish of the one against Rochester, and then against Buffalo. I think the Hens sneak in, especially if Jacob Turner gets brought back down.

ROVITZ: Well, I’m Ron, originally from Muskegon, MI and now residing in Amarillo, TX. And connections to the hockey world for me, really I’m just a fan, and my connections have all been through people I’ve met, like Shawn, or the GM of teams in towns I’ve lived in, or ex pro players who I skate against in men’s league. Really, other than that my connection the the hockey world is just from covering the WSHL for two seasons, an NAHL team for a season because I was working at newspapers. And then I got out of the reporting business because it was just miserable, and wanted to start a project that allowed me to cover what I love and know, and on my own time, and that’s how Shawn and I came up with this site idea.

I’m Shawn! I was raised in the Flint-area as a huge hockey fan. My hometown, Davison, was the home of Ken Morrow (Miracle on Ice, New York Islanders) and Stanley Cup-winning goaltender Tim Thomas. I grew up going to see the Flint Generals (U/IHL) and Detroit Red Wings a ton as a kid, and hockey was always my favorite sport. As I grew up, it became a legitimate interest for me to become a sports broadcaster, leading into my education of it in high school and college. In college, I co-created the Chippewa Hockey Network, an independent media broadcast network for our ACHA hockey teams at CMU, and eventually became the Chief of Broadcasting of the league. A good amount of my friends are working in junior, college, major junior, and pro hockey, and I’m honored and proud to have been able to transition from being in the ACHA at CMU, to graduating and now joining the SPHL’s Fayetteville Marksmen as the Director of Media Relations and broadcaster. I started covering low-level pro hockey with Hot Sprots Takes, and in working their under Ron, we transitioned into workshopping and starting this site, our passion project. It’s been a blast and I can’t wait for hockey to start.