What a day for the FHL, the league announced its newest expansion team in the Mentor Ice Breakers, and with it they went all out. Announcing social media accounts, coaches, owners, really everything in one handy package.

Including the name and logo! This name was a bit of a mystery to us as to what it might be, but they went with the Mentor Ice Breakers, and featured what I think is both Shawn and I’s favorite color scheme in the league, including a shark logo!

Have a look for yourself at the finished product: 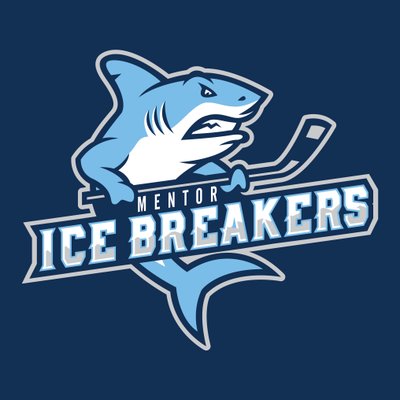 And since Shawn and I are such experts in the field of logos, we went ahead and decided to grade both the team name and the logo!

Like I noted above, this is my favorite color scheme in the entire league. There’s no red, or black, or orange, colors that get over used, in my opinion, so to see Columbia blue, Navy blue, and grey/silver is extremely refreshing.

On to the name, I will admit I feel about this name/logo combination a bit like how I did in our review of the Quad City Storm review, but I think this name is a little better. My only issues with the name are that plenty of hockey teams before a have been the Ice Breakers, and I’m not a terribly huge fan of hockey team that throw Ice in the name just because, we get it, you play on ice. Breakers alone would have been fun, and paid homage to the boats that smash through the ice on nearby Lake Erie. Either way, it’s a perfectly fine, if a little on the boring side.

Now for that logo. To me, this is one of the better ones in the league, and the FHL has some very good logos, with each of the five teams that have logos (Elmira comes out tomorrow, Wednesday) being good, there’s not one I’d call bad. But I think this is easily in the Top-2 in the league and very well could be the best in the league. It reminds me a lot of Carolina’s logo, and it turns out they were made by the same guy, Scott Markiewicz.

What both stands out and makes the Mentor logo great, is that it’s just so clean. It’s very straight-forward, it has bold lines and edges that make the logo and shark pop, but also has good details, like the shark’s teeth, the nick in his fin that shows he’s battle tested, and a nice wordmark that appears to have either waves or ice in it. It’s got just enough detail to make you notice and appreciate them, but not so many details that it seems busy to where you don’t know what to focus on.

Overall, I wish the name was a little more original so I give that a C, but I think the logo is top-notch and gets an A from me.

I got the info on this logo before seeing it, with the name being the first thing revealed to me. I was…worrisome. Ice Breakers? Like the mints? Or like that children’s game Don’t Break the Ice? I gave it points for originality, because it’s better than Bulldogs or Bears or Hawks or…whatever.

Ice Breakers is a fun name that branding can have a field day with. I can imagine so many promotions and slogans that can be designed and modeled just around the name.

My source then told me “the logo is a shark”, and I was honestly a bit thrown off. I anticipated a polar bear or a strong ship, but a Shark is a bold decision. Sharks and ice, at least from my experience, aren’t often synonyms. However I was reassured that the logo was awesome, and the colors were revealed to me.

This logo is a slam dunk. Easily one of the better (if not too five) sharks I’ve ever seen logo’d. The shark is true-to-color, holds the stick with its fins (true to anatomy), and has a perfectly intimidating look. Having him formed around the Mentor Ice Breakers name only adds to it. You can detach Sharky or keep him with the word block.

This is a stupid nice logo, and like Rovitz said, cleanliness and simplicity absolutely wins here. This logo does exactly what it needs to, and doesn’t go overboard. This and Carolina’s logos could easily be in leagues above the one they represent. And compared to our most recently graded logo – Quad City’s – this looks like a league switch.

Elmira set the tone with press conference and staff last week, but Mentor has raised the bar and set the precedent with its social media, logo, and branding.

Tomorrow is going to be a fun day to see what Elmira does.

But Mentor did it BIG here.

The name is original for the league, and one unused in a while, and respects geography. The name is a B, and this logo is a DEFINITE A for me.