If there’s one thing we love in life, it’s mascots.

And especially at the minor league level, where the mascots are full of hijinks, often an attempt at recreating something local, and generally just a hilarious thing to keep an eye on during stops in the game.

And the Southern Professional Hockey League is full of fantastic mascots that range from a bull to a bird wearing pilot goggles, so there’s definitely something for EVERYONE. But who has the best mascot in the SPHL? We put it to a vote to find out! Our voters include some friends of the site, broadcasters, league commissioners, and even someone who is a real-life mascot!

Our panel took into account how the mascot looks, because it’s a delicate line between being a freak, and being too cartoony looking, how well it ties into team name, and just overall how fun the dang thing is.

Here’s how it worked, we had each voter rank the SPHL mascots from 1 to 9 (Sorry Quad City, no actual mascot yet means no vote), and tabulated the number of points each mascot got. So if one mascot received all first-place votes, they’d finish with seven total points, the lowest score possible. Conversely, if they were voted in 9th on every ballot, they’d finish with 63 points, the highest score possible.

The voting for this was INSANE. With six of the seven voters picking a different top mascot, and us even needing to reach out to an extra two voters to break a tie after five voters.

Without further ado, here are the results: 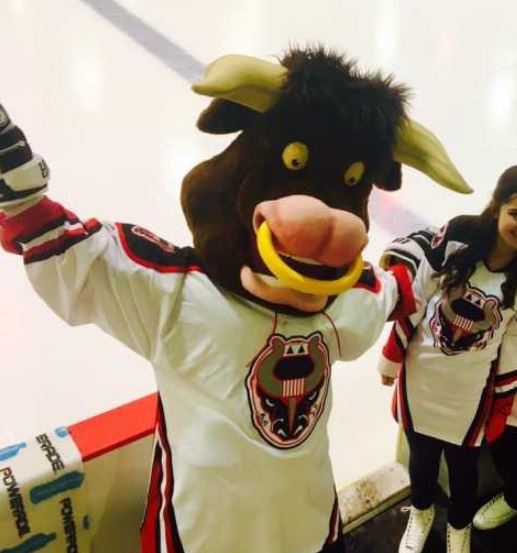 ITS NOSE LOOKS LIKE A BUTT. Really, this was the only mascot that nobody was a fan of, with this being the only one of the bunch that didn’t get a single vote in the top-half of the respective polls. If it weren’t for the nose, there’d be a ton of discussion about how he has crazy eyes. Overall, just not a great mascot and one that probably frightens kids on a nightly basis.

I feel bad this fun pair is eighth, because they’re honestly not a bad duo, but they just didn’t resonate with nearly all of our voters. They’re silly looking, have crazy but fun eyes, have fun smiles, and incorporate team colors well. The hard part is, what’s a Havoc? Honestly, for a singular nickname, this isn’t had, but these could easily the mascot for a team like the Wolves or something else.

Again, there’s nothing wrong with Chilly, but I think he loses points among our voters because there really isn’t anything special or standout about him. He’s a fun-looking bear, has the team colors and jersey in there. Again, there’s nothing wrong with Chilly, he’s just pretty basic. Honestly, I think what would have made him really standout was if they had more of the team’s purple color in his fur.

Pride is fun, and does a good job of balancing the line between menacing and fun. The only problem: He’s a lion mascot for a team named after planes, so it doesn’t really make sense. I don’t know how the decided on a Lion, but it wouldn’t have been my first choice. Maybe you figure out how to get more pilot stuff in there, like goggles, or those leather helmets pilots wore, it might have scored higher. Pride is fun, but just doesn’t really connect with the team.

That’s how you tie-in the team name to a mascot that isn’t exactly the team name. Rivermen is a weird thing to make a mascot of, so a beaver is a great choice to substitute in, and the captain’s hat is a really fun touch. Plus having him out there playing hockey show’s he’s an athletic mascot too. The eyes on Rocky are a touch strange, but this is a good mascot that I would want to have my picture taken with.

IT’S A DOG ON SKATES WHO HAS A TRAIN HAT ON! This is really fun, everyone loves a dog mascot (Except Drake MacKenzie apparently /glares/), and this does a good job of being both fun but intense. What really makes this one for me is the details in the outfit, the only mascot in the league to not wear a team jersey, but the train engineers outfit is perfect. The overalls, the bandanna, the hat, it’s all so good. I love this mascot.

While singular nicknames can be hard, the Mayhem nail it with Mac, who appears to be a viking. He looks almost exactly like the logo on their jerseys, and his big grin and bigger beard are a great combination. He also has intense eyes so he’s not a complete softy. But again, the beard is really what makes this one, that thing is majestic and something that all fans love.

Remember how we said that if you have a mascot that isn’t exactly what the team is named after should tie-in to that name somehow? This is how that’s done. A bird for a another plane nickname is a great tie-in, but the leather helmet and goggles on Maverick are fantastic. HE LOOKS LIKE HE JUST GOT OUT OF A PLANE! The hockey gloves are a fun touch, but like we said, this one is all in those great details that make us think a bird could actually fly a plane.

Hey wait a minute. How did the mascot of the team one of our writer’s works for win? All kidding aside, Marky is awesome. He looks just like the fox on the jersey, just a cartooned up version that’s more kid friendly, he has a fun grin on his face, and is the type of mascot that just plain makes you happy. I bet Marky spends all game taking pictures with kids.

So those are our rankings! What do you think, did we nail it or do we need to let Russia rig the next vote so your favorite mascot wins next time?

And because we can, here’s how our panel voted:

One thought on “Who is the best mascot in the SPHL?”