Long-time professional hockey region, the Quad Cities, have made a fine integration into the Southern Professional Hockey League’s fabric heading into their first season.

While losing the Mallards’ name was an end to a long history, the Storm name has been relatively well-received.

The initial logo, which was revealed to be a boilerplate a few days after the announcement, shared elements of other teams with the storm name, most notably in the tornado.

While this logo reached a bit of a split decision on our site, it was only temporary.

The @QuadCityStorm has changed its logo! ⛈🏒 Here’s a look at the original and updated image. pic.twitter.com/RUjpYYRXFv

Today, it was revealed that the Quad City Storm have unveiled their new logo, with a similar font-style. A reminder, we were both high on the font in the initial logo.

Here it is! The updated Stormy! This logo definitely has more originality to it, as it’s no longer just a tornado or a tornado with hands forced to hold a hockey stick. You can tell that they definitely listened to feedback from the fans and SPHL community, and made the tornado (who we’ll continue to call Stormy) a prominent feature rather than hide it.

Looking at these logos next to each other, there’s a clear upgrade present, which is what you hope for! How does it hold up to our grading? Our writers put it to the test!

I’m a BIG fan of this upgrade. For me, Stormy was a prominent feature that diversified the logo from other storm names. I talked highly of Lake Erie College or the OHL’s Guelph Storm (who, coincidentally, also updated their logo to a better, albeit-more warthog looking tornado) logo and color designs, but Quad City definitely looks multitudes better than it did before.

The “Storm” typography looks even more menacing arched like that over the tornado, and really gives it that doom-and-gloom aesthetic. Just for THAT it’s a huge improvement. We always enjoyed the font stylization, and not just having it stacked is a major improvement. The cloud is, as one commenter put it, still flat, but I think it’s simple and does the job.

Now, for Stormy. The lightning bolt hockey stick is nice. That adds in itself a unique touch that sets it apart. The missing tooth from Stormy makes it clear and evident this is a hockey logo, and that has a lot of power in brand recognition. I do wish that his eyes were still yellow, as I think that had a perfectly evil look to it. Though, I think that the design of Stormy is overall a massive overhaul improvement over what was there. It almost has a cartoony (see: Spongebob) feel to it, but mixes intensity and cartoony for a real logo feel.

I was generous with my grading last time, and I’ll be fair today.

A logo worthy of matching the typeface. Great improvement and a true minor league logo. This logo gets an A.

I was a fan of the original logo when it launched, good colors, even if it lacked a little in originality. It had a good font, and a decent little tornado…that we then found out had been used before.

At first glance, I was worried about the new logo when I saw it on Twitter, but that was a colorless version, and once we saw the big, bold version on the official Quad City Storm account, it really popped and stood out, so I think this is a big upgrade from what they had before.

I appreciate that they kept the base for the Quad City STORM font and typography, that was honestly my favorite part of the original logo, and arching it to make it feel like it’s more a part of the cloud above it makes it stand out even more, that’s a really nice touch.

Now onto Stormy the Tornado. MASSIVE upgrade there. The previous one was used before by a few other low-level teams, and was just kind of there, with a hockey stick just sort of placed into his hand. That’s right, he was holding it with one hand. The new version is front and center where he should be, the missing tooth is a great touch, and the lightning bolt hockey stick is a great twist on using hockey equipment, but making it unique. And the logo isn’t so intense that it’s scary, but also isn’t so cartoony that people wouldn’t take it seriously. Honestly, and Quad City fans may kill me for this since they were once bitter rivals, but it reminds me a little bit of the purple, teal, yellow era of the Muskegon Fury. 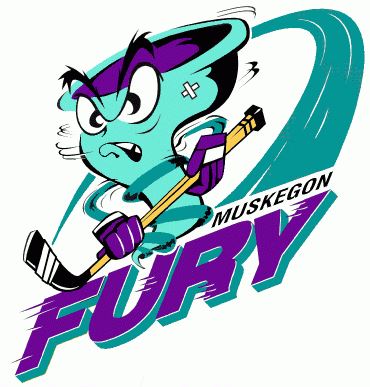 The other thing that makes the newer version of the Quad City logo a big upgrade: It will look and fit much better on a jersey than the old one. The old one just seemed like it would take up the whole chest and leave a ton of room below it on the stomach area, this new one, with Stormy front and center, makes it more symmetrical and will take up equal space on the jersey.

OVERALL: A big upgrade, it’s unique, retains the good color scheme, and puts a fun tornado mascot front and center rather than off to the side, this is really well done. It’s an A from me.