I grew up with the Flint Generals, I remember being five in 2000 and watching them win their second Colonial Cup finals, I remember Jim Duhart, Lorne Knauf, Jim DiPace, Chad Alban and my all-time favorite Nat, Justin Styffe. I had so many great memories of them and I was absolutely devastated when they folded.

But we didn’t have to wait long to have a return of Pro Hockey as the All-American Hockey League and the Lapeer Loggers came to town in the Polar Palace. Being a young kid in 2010 (I was 14) I was so completely excited, PRO hockey, in my hometown, made up of mostly old Flint Generals? Count me in. 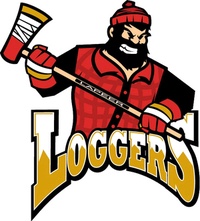 Unfortunately, off the bat the league had some red flags, the Madison Ice Muskie, moved to Wooster, Ohio and then back (or something like that), the Indiana Ice, moved back to the Chi-Town Shooters sometime during the season (The played out of the same building in Dyer, Indiana, they evidently got new owners and changed the name). The league in retrospect was a dumpster fire, with 6-8 teams throughout its three-year existence moving yearly.

But I didn’t care, the Loggers were going strong, starting their home-opener with nearly 1300 fans in a 3-2 loss to the Troy Bruins. They seemed to sell out every single night, both Lapeer East and Lapeer West high school teams [now just one Lapeer HS] seemed to be there for every single game, the town really rallied around this team. The Loggers and their cross-state rival the Battle Creek Revolution were in an epic battle for league supremacy, both flip flopping between first and second place.

Now, I have been to a TON of hockey games throughout my life, of all levels, but still, the greatest hockey game I have ever been too, was the Stanley Cup Night versus the Queen City Storm (Oh yes, and it was the Teddy Bear Toss). The game was completely sold out, no standing room, no access to the mezzanine, nothing. Every inch of the building was full for there chance to raise the Cup. When game time started, Lapeer didn’t come out to the ice (sadly this was the beginning of the end of the league and team, the players hadn’t been paid and refused to take the ice). When Teemu Oska (former Flint General) ripped the first goal 6:46 into the first period, the place erupted. I mean literally, The Polar Palace is small 1,500 seat arena, with a low ceiling and that thing rattled, you couldn’t hear the goal horn, the announcement or anything., just delirious screaming.

Lapeer won the game 8-4 and for at least the night, we felt like a hockey town.

Shortly after that though, the league and team folded, with the owner leaving the Polar Palace with a hefty bill and players unpaid, it was a tragic way to end what could have been an amazing thing. The team was averaging roughly 762 a night (higher than every team in FHL except Carolina).

I would love nothing more then to see this happen again. Lapeer is a strange community; in many ways it is a small version of Flint, most people in Lapeer and its surrounding communities do not leave Lapeer county very much, most people don’t go to Firebirds games, there is absolutely no competition when it comes to entertainment options in the winter, in short Lapeer is starving for an identity beyond its high school and this would fit perfectly around the town.

The Polar Palace seats 1,500 in the rink, with standing room. The Mezzanine level (think of it as a big suite) holds an additional 300. That puts the seating capacity comparable to Watertown, it would give Port Huron and Mentor a close rival and if the FHL goes to Battle Creek, would have an old established rivalry.

EDITOR’S NOTE: Polar Palace also has its own pro shop, heated bleachers, eight locker rooms, popular bar & grill restaurant Louie’s, and two sheets of ice. It is roughly a mile or two from downtown Lapeer. The seating capacity is 1000, total in rink capacity is 1395, and with “The Mezz” gets to 1600-1700.

So how about it Federal Hockey League? Gives us a neutral site game! Anything and you’ll be impressed what Lapeer could be as a hockey community. Done right, this could be the gold standard of the Federal Hockey League (I’m calling you out, Carolina) and really be an epic little minor pro town.

Drake MacKenzie is the Commissioner of the Interstate Hockey League, and an avid Minor Hockey Fan & Historian.