We here at Bus League Hockey don’t typically cover the American Hockey League, due to its immense popularity as one of the world’s best hockey leagues – but when it comes to mascots, we’ll always make an exception.

What better representative to start with, then somebody who’d be more than familiar with the ice like a penguin? Not just any penguin though, our new mascot best friend Tux from the Wilkes-Barre/Scranton Penguins!

Tux followed our Twitter (@BusLeagueHockey) some time ago, and we knew we needed to get the EXCLUSIVE interview with him. After a busy off-season schedule as arguably the most popular penguin in Pennsylvania (we have not heard from Pittsburgh’s IceBurgh), Tux finally had the chance to talk with us – not in person of course. Mascots can’t talk.

BLH: Are you originally from Wilkes-Barrie/Scranton, or did you migrate from the South Pole?

Tux: My family and I all came from a tiny ice clump down in Antarctica. I moved to Pennsylvania before my first birthday.

T: Pretty much as soon as I was born – way down in Antarctica – I was OBSESSED with skating and sliding on ice! After school, you could always find me practicing my skills. When Papa and Mama Tux showed me Ice Hockey for the first time, I knew I was destined to make it in the sport some day.

B: What is your relationship with Iceburgh of Pittsburgh?

T: He is my big brother and my idol! I’ve been trying to follow in his footsteps as a mascot for our teams for 19 years now! We don’t see each other as much now because he has been very busy winning Stanley Cups with Sidney Crosby and the Big Pens but we do keep in contact! 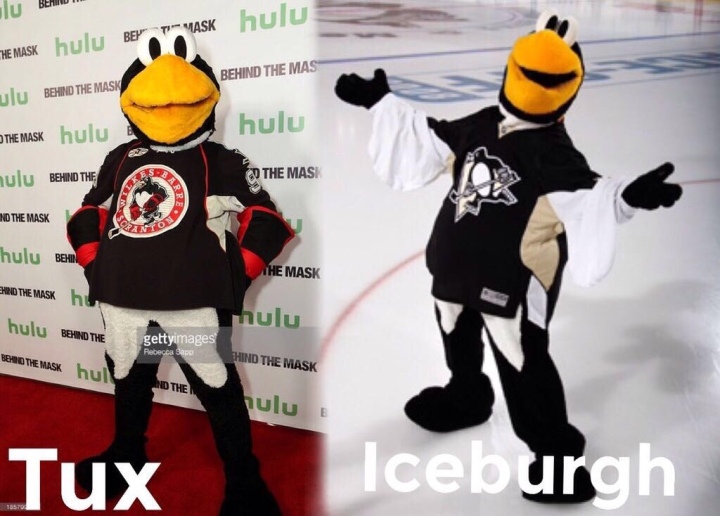 B: How did the negotiations between the organization and your species to be allowed to use the penguin name go?

T: Iceburgh really cemented the way for that. All of us here in Antarctica were so proud that one of our own was going to be in The NHL, it really paved the way for me as well. We were all so excited that we had no problem with us being represented in professional sports!

B: How did you, personally, become the mascot?

T: My family and everybody in our tiny ice-village was already pushing for me to follow in Iceburgh’s footsteps. So, when Pittsburgh announced that they would have their Minor League team also in Pennsylvania, my bro put in a good word and got me my job before I was even a year old!

B: Have you ever tried flying?

T: Myself? Yes… it didn’t end well. Like most Penguins, I like to keep my feet on the ground.

B: Is it hard to be away from the flock back home?

T: Mama and Papa Tux still live back home. I do miss them a lot sometimes! Papa talks about wanting to come see me at a game this year, which would be very exciting! It helps being away now because I’ve met so many amazing fans here in the Wilkes-Barre/Scranton area over the years that I never feel alone! These fine folks are all apart of the family and I couldn’t thank them enough!

B: What’s your favorite food?

T: EVERYTHING! However, if I had to pick a favorite…Fish, Popcorn, Crab Fries, Burgers, hot dogs, or anything found at the Arena.

B: How did you get so tall?

T: You know all that food I mentioned? That helped! Also, having access to the teams training equipment helps me keep in shape and helped me grow up big and strong!

B: You’re not the first penguin with the name Tux representing an organization, but you outlasted Linux’s Tux. How does it feel to be the dominant penguin?

T: I was named after him, so it is a great honor to carry on this fine name!

B: Being a team half-associated with Scranton, I’m sure you get asked about The Office all the time. Are you disappointed you didn’t get represented in the show?

T: A little, but we did get one of our jerseys in an episode! Dwight Schrute – the Assistant TO THE Regional Manager – once got Michael Scott a jersey for his birthday!

B: Does the franchise use Dunder Mifflin paper?

B: Did you ever meet Michael Scott?

B: Better of the two cities: Wilkes-Barre or Scranton?

T: This is why we have both cities in the names! They are both so good that we couldn’t decide! We have a lot of good restaurants here in Wilkes-Barre, but Scranton has a lot of good movie theaters. They have popcorn. I love popcorn. I, myself live in Wilkes-Barre and usually spend my time going to the weekly farmers market, fishing the Susquehanna River, skating at our practice facility, or chilling with our fans.

B: Are you related to Pete and Penny Penguin of Youngstown State, or is that simply a coincidence?

T: I’ve only ever met them once but I’m sure we are related somehow!

B: Did you ever play “Club Penguin”, or was it too derivative?

T: Of course I play it! It’s a game about penguins!

B: Are you afraid of any “mascots”?

T: No way. But some mascots are afraid of me. Particularly Melvin from the Lehigh Valley Phantoms and Coco from the Hershey Bears!

B: More accurate representation: “Happy Feet” or “Penguins of Madagascar”?

T: A little bit of both! We love dancing but we also love to be mischievous. Just ask our arena staff!

B: What’s the deal with all the popcorn dumping?

T: Sharing is caring, and I love to share! Especially with opposing teams fans that like to show up at our games.

We thank Tux for his incredibly valuable time, and look forward to keeping up with his antics for the “Baby Penguins” this season. A secondary thank you of course to the Penguins organization for allowing such a popular penguin to give us his time!

You can keep up with Tux’s adventures on his Twitter @99TUX99, and with the AHL’s Wilkes-Barre/Scranton Penguins @WBSPenguins.