The rumor mill is WHITE HOT as we start your work week, with two rumors coming in to us at BLH that could be setting the FHL up for big things in the future.

After much of the rumors and news regarding expansion had gone quiet over the past couple weeks (and us having real life issues things coming up), we had a two tips in one roll into our inbox this week.

Here’s the first part that we saw from one of our sources inside the league, which confirms what we’ve said in that the league is likely adding two expansion teams for this coming season 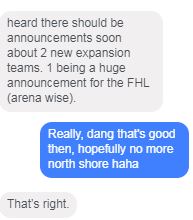 Now, as you can see, and as we speculated earlier this off-season, it looks like the league will not play with the North Shore Knights, and really, that’s a big a positive for the league as adding two expansion teams is.

But the news didn’t stop there!

Our source slipped up (I think) and let out that the second team, with the first team of course being in Mentor, Ohio, would be placed in New York for this coming season. 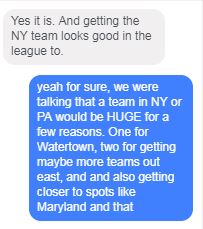 Now, let’s combine that remark about the team being in New York, with the first comment above about one being a huge announcement for the FHL, in terms of arena.

We’ve speculated about what possible markets the FHL could be eyeing, and the only one off the top of my head that I can think of that fits the bill for New York and FHL territory, is Elmira. And I’ve scoured the map high and low looking for cities and rinks that fit that mold, and with Jamestown, NY getting a NAHL team, Elmira is the only one left that makes sense.

And Elmira would for sure be a massive get for the league. It’s an established hockey market that had UHL and ECHL hockey for nearly 20 years before folding after the 2016-17 season.

Since then the arena in Elmira, which would be the crown jewel of the FHL with 3700 seats plus suites, has changed ownership and was even in negotiations with the FHL last year to bring a team to the arena, with negotiations going into mid-July before the league and potential owners failed to reach an agreement and put the talks on hold.

But it would also be a huge boost for the league not just in terms of credibility to get such an established hockey market and arena, but for future purposes as well.

At the moment, it gives Watertown a regional rival with it being a 3-hour drive from Watertown to Elmira, but more importantly, it potentially opens the door for more eastern teams, like perhaps Salisbury, Maryland, which has long been rumored to be a desired market for the FHL. And maybe even other cities in the northeast.

And while nothing is “official” yet, it looks like the FHL will play the 2018-19 season with Danville, Port Huron, Mentor, Elmira, Watertown, and Carolina. Here’s how a map with those six teams would look:

Now, that looks pretty good for Port Huron, Watertown, and the rumored teams in Mentor and Elmira, but kind of leaves Danville and Carolina out on their own islands, as well as a HUGE gap between Carolina and other teams.

But the league is rumored to be looking at southern cities, with a team in North Carolina being hotly rumored, a team in Charleston, WV being discussed, and the previously mentioned team in Maryland. Maryland and West Virginia would certainly fill in the gap between the southern team(s) and the northern ones, but still leaves Danville kind of out on an island in Illinois.

So yeah, to recap: It sounds like the FHL has two teams for sure coming, and we have thankfully seen the last of the North Shore Knights in the FHL.