As the FHL off-season rolls along, there has been a lot of smoke in terms of expansion news and rumor…but very little fire.

One strange thing has been the saga of the reported expansion team set to take the ice in Mentor, Ohio. The one expansion team and rumor that seems like a 99.9% lock, and one that has had two dates mentioned in which we could expect an announcement.

And yet, both of those dates that have been said by league officials have come and gone, and we still don’t officially have a team in Mentor.

This story started about a month ago when we heard the FHL was “looking at a city near a major city in Ohio” and began searching Google Maps for any cities that were near a major city and had an FHL-caliber rink.

We struck out A LOT to start, before one night we stumbled on Mentor and the Mentor Civic Arena, which prompted us to send out a message to the rink asking about the FHL possibly playing there in the fall.

We received a response from an administrator at the Mentor Civic Arena, who was particularly confidential on saying anything that could confirm or deny the city would be getting a Federal Hockey League team.

They did give us this specific piece of information, though.

“Any announcement of this sort should, out of courtesy, be made by the representatives of the Federal Hockey League…I can tell you that it is common for us to talk with a multitude of potential ice users/partners and, yes, the FHL has been among those.” they said, “All of the specifics of the Arena have been shared with the FHL.”

And then there was this from Carolina Thunderbirds GM, Scott Brand, on Facebook: 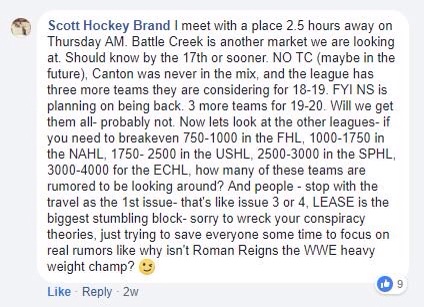 The 17th he mentions was in May. And as you have already learned, we did not get an announcement for Mentor, or for any team. Which, OK, things happen and I’s need to be dotted and T’s need to be crossed, it’s understandable.

So we waited roughly a month, and more info about Mentor started to trickle out, and again, Brand took to Facebook to post the latest info about when a potential announcement would be made. 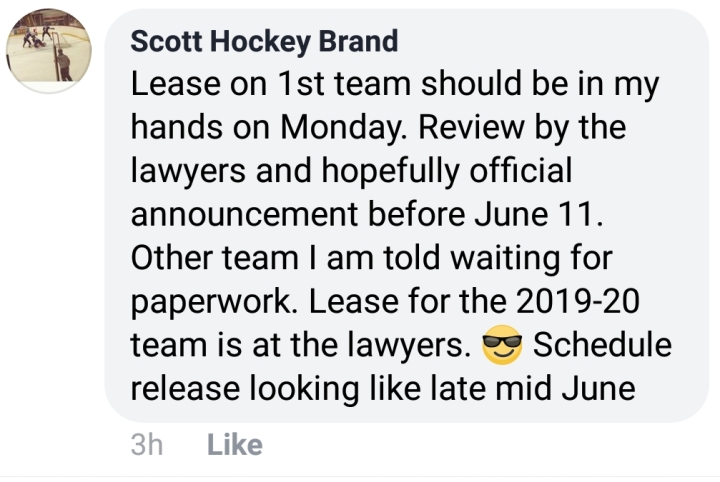 And once again, the 11th came and went with absolutely no news about a Mentor team, or the rumored second team that has been a mystery to try and figure out who it is.

Well, in the week leading up to the 11th we heard from an inside source that the saga with Mentor had taken a slight turn, saying:

…PA is not happening now at this moment and Mentor is giving some push back on the lease. So they have to work on it more now.

And then less than a week later, those issues seemed to have been taken care of, which would keep the announcement date of the 11th on track.

BLH: Heard things got ironed out with Mentor, any truth to that?
SOURCE: I heard things are real close.

And as we’ve seen, nothing has happened yet. And then yesterday, we got another small hint from Vice Commissioner, Andrew “Sarge” Richards who had this to say in a FHL fan group about expansion after the news that the NAHL had taken over the Jamestown, NY market that many FHL fans had been hoping for.

The “local government” in this instance would be Mentor, since the arena there is city property. And Richards’ statement echos what we heard from our source, that something happened between the city and the league that caused a delay or hiccup in potentially announcing a team on June 11.

So what does all of this mean?

It means that Mentor is still probably happening, we’ve stood by that news from the info we’ve gotten since Day 1 of finding out the city has an FHL-ready arena, but it also raises some concerns.

A May 17th expansion announcement for a brand new team is probably about when you want to make the news official. That leaves you part of May, all of June, July, August, September, and most of October to market the team, sell season tickets, hire coaches, scouts, front office, get volunteers for various things lined up, get gear made, basically all of the things a team needs, and you have a solid 5.5 months to do it.

Now you’ve wasted at least a month, because if announcement doesn’t happen by Friday, suddenly 18th is Monday, and if nothing happens then, you’re down to four months to try to get all that done. Every day that you wait is one less day you have to do all those things. Again, this isn’t relocating a team where all the stuff except for tickets and local marketing are done, this is starting from ground zero. And this issue is just as pressing, if not more, for the reported second expansion team they want to add this season.

Now, it’s worth noting at this point that last year the FHL and the rink in Elmira, NY negotiated into mid-July before they couldn’t reach a deal, so evidently the league, and some potential owners, think that 3.5 months is enough time to make  all those things happen. We have our doubts about that, but we’ve never tried to run or create our own hockey team.

So we think Mentor is 99.9% still happening, but every day that goes by without an official announcement is reason for pause, and reason for wondering if the team can be a success with less time than they’d hoped to get everything done. The FHL off-season, it’s never boring.