From the moment it was officially announced that the Quad Cities region of Illinois and Iowa were continuing hockey in the Southern Professional Hockey League, it was celebrated as a huge win for the league to get such an established hockey town.

I agree in that at the moment, it’s a win for the league, especially after Mississippi folded, to keep the league at 10 teams for the upcoming season.

Now, before we get started let me say I am thrilled for hockey fans in the region, because no town should ever lose its team, and I’m the type that I would rather have any type of hockey than none, and the SPHL is a great, fun league that is doing a lot of things right.

But I remain cautious, and a bit worried, about if the SPHL will be successful in Quad City for a couple of reasons.

The first being attendance. Over the last four years the team did well by ECHL standards, pulling in 3900, nearly 4400, 3900, and then dipping to 3450 in the last season. And they still lost money, lots of it reportedly.

When hockey first started in the CoHL and UHL, they were over 5000 a night for the first nine years, including five-straight seasons over 7500 a night. But their last season in the UHL in 2007 it was down to 3120 a night.

So it’s all over the map, and really doesn’t seem to correlate with league quality either, but the one theme seems to be that it started strong, and gradually declined to right around the break even mark before they moved on to another league.

My question after bringing up all those numbers is a question I often bring up for so many northern cities over the years: The town has seen their team fluctuate from league to league over the years, going from the UHL and jumping three leagues to the AHL, dropping three back to the IHL, jumping one to the CHL, jumping one to the ECHL, and now dropping back down to the SPHL, will fans be fed up with that and support a lower league?

It makes me wonder if fans will go to the SPHL, see that it’s a lower caliber of play than what they just had in the ECHL, and will make more fans stop going because they don’t want to spend that money. It’s a bit of a tough sell telling people in town to go see a team that might send a handful of players up to the league that just left.

Maybe they settle in near the numbers they did in the CHL, around 3300 to 3400 a night, that might work, because the ECHL is reportedly three times the cost of operations in the SPHL, and most say that in the SPHL you need 2500 to 3000+ a night to make it work. But if fans are turned off by the league and it dips below 3000 a night, I have major concerns due to my next issue.

And that’s travel. While in the ECHL they had numerous teams nearby that made for pretty decent rivalries and were able to cut down on costs. Take a look at the ECHL map from last season: 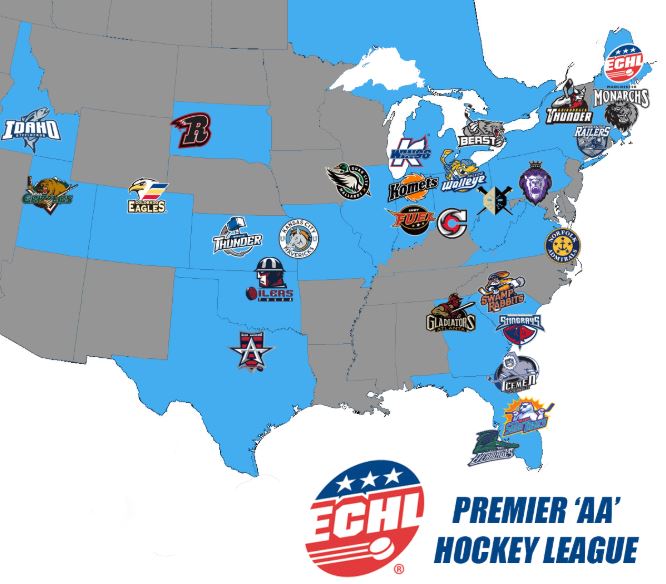 Quad City was a bit west, but numerous teams in Michigan, Indiana, Ohio, and Missouri were all nearby. Even in the ECHL this past season, they had no long trips to Idaho, Utah, Colordao, Texas, or Florida, but did have a couple out east, and one to Rapid City. So most of their 72 games were within an 8-hour circle.

Now here’s where they sit in the SPHL, ignore Mississippi. who was the third closest team at nine hours away:

They are the northern- and western-most team in the league. Peoria is 90 minutes away, Evansville is 6 hours away…and then here’s the travel to the other seven teams, rounded to the nearest 15 minute increment:

That’s a lot of long bus rides in a league with no divisional games. Granted, I think the SPHL will try to throw a few extra home and road games in against Peoria and Evansville to try to help cut down on those trips, but still, that’s seven teams all roughly 10+ hours away that they’ll have to make. But on the flip side of that, there will be less road trips, and ice time rental, because they are going from a 72-game season to 56 in the SPHL. Still, it seems to me there will be more travel in the SPHL than there was in the ECHL.

I hope for Quad City, the SPHL and hockey fans in all of these cities that it works out, but I am cautious in saying that it will be a sure-fire success.

And if you stop to think about it, this is the region’s last chance at pro hockey. Because there is no other league they could play in if the SPHL experiment fails. (yes there’s the FHL, but no chance they’d ever play there), without dropping to the USHL and junior hockey.

Best of luck Quad City, I really hope things work out in the SPHL, but most of all, I’m glad you have hockey this season, and hopefully for a long time into the future.