Battle Creek has at least been confirmed as considered for Federal Hockey League expansion in 2018-19.

Carolina Thunderbirds General Manager Scott Brand made the trip there a few weeks ago, and publicly confirmed this interest on numerous occasions.

This, however, isn’t the first time that the league and this city have been in talks.

In early 2017, an ownership group headlined by Military Veteran and former FHLer Lawrence Miller (who we’ll have an interview and article with later) formed with the intent of filling the recent vacancy at Battle Creek’s “The Rink” caused by the relocation of the West Michigan Wolves (NA3HL) to Dimondale, MI (Lansing Area).

The Rink gained new ownership following this falling out, and this inspired the group to work towards their plan. New ownership brought new blood to making hockey a legitimate part of the community of Battle Creek, the way the Battle Creek Bombers of the Northwoods (Collegiate Summer Baseball) League have. 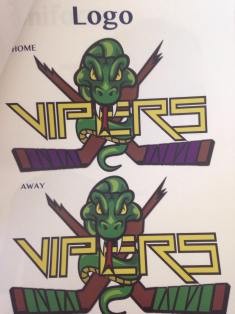 Their plan was aimed at relocating the failing St. Clair Shores Fighting Saints, to save on franchise fees, and being able to keep established players to get the team on the ice immediately for 2017-18.

They were to be known as the Battle Creek Vipers, and were intended to keep Michigan as a two-team state. The “Vipers” name was meant to pay tribute to the timelessly popular International Hockey League team Detroit Vipers (1994-2001).

In typical expansion consideration fashion, the FHL wanted to dip their foot in the water by giving The Rink a neutral-site game between St. Clair Shores (since relocated to the North Shore Knights) and Berlin River Drivers (since folded).

WRITER’S NOTE: It is worth noting this is still more than North Shore brought in on average during home games this season.

There are handfuls of reasons why this failed: the weather was atrocious, the game was at 5 P.M. on a Michigan-winter Sunday, there was a major youth hockey tournament that called away all the hockey families from Battle Creek, the exhibition was approved and marketed in about the span of a month and was relatively unknown in the city, let alone the Southwest side of Michigan. 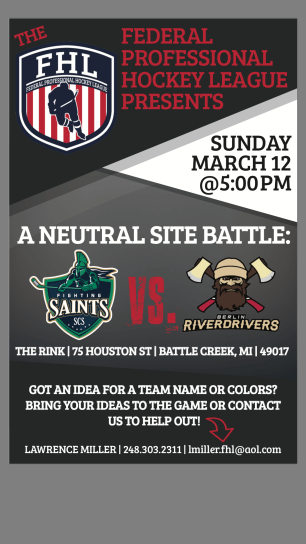 Unsurprisingly, the ownership group all-of folded aside from Miller, who stuck around and held true to himself.

This is where I come into the situation, as I soon became part of a revitalized ownership group. Seriously.

Fueled by Miller, myself, and a colleague of mine from college, we were instructed by Miller to work from a media standpoint and start creating a corporate sponsorship outline to start getting bigger businesses in the mindset of helping financially support a professional hockey team.

Multiple meetings were had between the three of us, in person or on group phone calls, and it was here where I obtained ownership of the expansion-feasibility packet presented to the City of Battle Creek.

Miller was so serious about making Battle Creek the new home of the FHL, he was willing to do whatever gimmicks, marketing, partnerships, or work was needed to bring more partners and people to be interested in professional hockey in BC.

Battle Creek, home of the Kellogg’s Company (yes, that Kellogg’s), has been affectionately known as Cereal City for at least my entire life, and was the former home of the Disney World-esque cereal themed amusement park: Cereal City, USA. One of my favorite memories as a kid was going there and getting my face on a Corn Flakes box, but, that is a story for another time.

Admittedly, despite the hopelessness of the situation, enough commendation cannot be given to Miller for his tireless, nearly entirely independent efforts of working at City Council Meetings, organizing meetings with corporations, creating an incredibly close partnership with the new management in charge of The Rink to be all-in on creating a rink feasible for the FHL, and almost one-man-banding the situation.

Too much was too unrealistic in too little of time, and the FHL clearly had its eyes on Kingsville, Ontario where it had had more “heavily” attended exhibition site contests, a legitimate ownership group who had also staked claim in the Greater Metro (Junior A) Hockey League in Ontario, and seemingly as soon as a team was in St. Clair Shores, so soon it moved to the “North Shore”.

Over a year later, and now the FHL has legitimately put Battle Creek on their expansion map, and Lawrence Miller is detached from the situation, pursuing alternate pastures that we cannot wait to report to you.

If the Federal Hockey League and Battle Creek can come to a deal, whether this season or next, it should not be without mention and remembrance of a heavily inspired former player.

One thought on “FHL, Battle Creek Almost Happened in 2017…Sort Of”