In a strange bit of news that was announced over the weekend, the East Coast Hockey League has reportedly filed a trademark for the former Central Hockey League, which folded in 2014 and had its remaining teams absorbed into the ECHL.

For those who don’t remember, the CHL was one of the longest-running independent minor leagues, playing from 1992 to 2014. The league started with just six teams in that 1992-93 season, with three of the teams from that inaugural season, Memphis RiverKings, Tulsa Oilers, and Wichita Thunder still playing in various leagues. The league grew to 16 teams in 2001 when they absorbed a whopping 10 teams from the WPHL, but lost five teams who either folded or jumped to other leagues. The league peaked in 2010-11 when they grew to 18 teams, but dropped to just 10 for the final season after six teams folded and another seven jumped to the ECHL or switched to NAHL teams. After the final season, three teams folded, and the remaining seven teams were accepted into the ECHL.

This could be an interesting development, because as the ECHL grew and took on more teams, it always seemed odd that they kept the ECHL moniker, especially when you consider that more than half the teams are nowhere near the east coast.

But it could just be them covering their bases, and keeping the trademark so another league doesn’t take it and try to start up the league again, like some are trying to do with the former UHL.

But there’s also this: 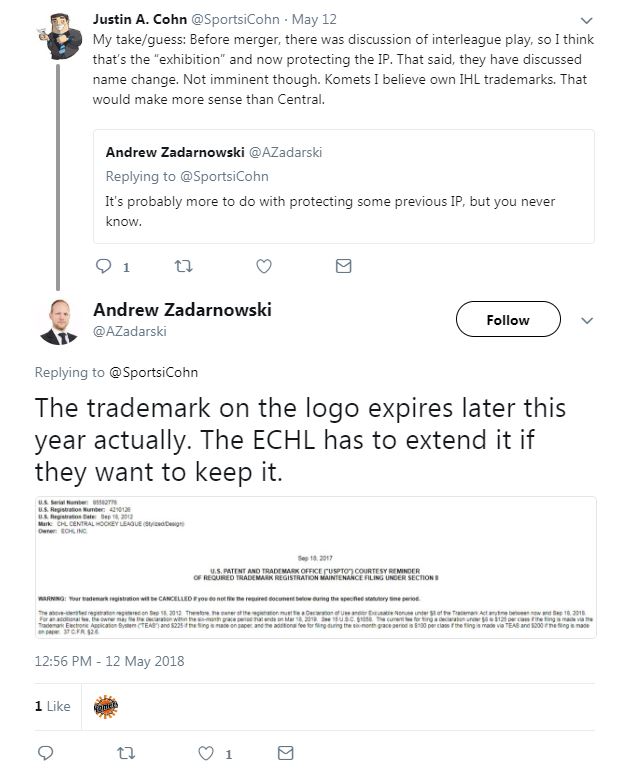 It’s worth noting that Justin Cohn works for the newspaper in Fort Wayne, and would be in the know on discussing like this with arguably the ECHL’s most successful franchise being there. And he also make it sound like a name change isn’t coming in the near future.

But there’s also the little nugget in there about the IHL, which folded in 2010 after three seasons when they switched to that name from UHL. There are teams in Canada in the ECHL, and more coming so affiliates can be closer, so IHL would make more sense, if the league were to switch names, than CHL.

Either way, it’s something to keep an eye on going forward for the league.